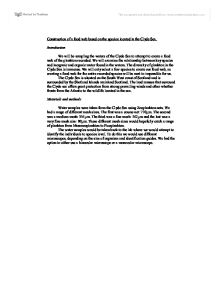 Construction of a food web based on the species located in the Clyde Sea. Introduction We will be sampling the waters of the Clyde Sea to attempt to create a food web of the plankton recorded. We will examine the relationship between key species and inorganic and organic mater found in the waters. The diversity of plankton in the Clyde Sea is immense. We will only select a few species to create our food web, as creating a food web for the entire recorded species will be next to impossible for us. The Clyde Sea is situated on the South West coast of Scotland and is surrounded by the Shetland Islands mainland Scotland. The land masses that surround the Clyde sea offers great protection from strong prevailing winds and other whether fronts from the Atlantic to the wildlife located in the sea. Materials and methods Water samples were taken form the Clyde Sea using Zooplankton nets. We had a range of different mesh sizes. The first was a course net: 710?m. The second was a medium mesh: 335?m. The third was a fine mesh: 142?m and the last was a very fine mesh size: 90?m. These different mesh sizes would hopefully catch a range of plankton from Mesozooplankton to Picoplankton. ...read more.

Dinoflagellates tend to be more successful in stratified water columns, and adopt a diel vertical migration pattern to prolong their life span, where they feed near the surface at night and return to greater depths in the day to avoid visual predators. This means they have the ability to move around in the water column. There have been some recordings of some dinoflagellates being toxic. Half of dinoflagellates are hetrotrophic (Williams et al, 2005). Another type of primary producer we encountered was the diatom. Diatoms are the most common type of phytoplankton. These organisms are non-motile which is why they usually thrive in well-mixed areas. They have a high growth rate which is evident as spring blooms often occur. Copepods were the highest member of our food web. Copepods are crustaceans and many species are planktonic. The play a key role in food webs, not only as predators on phytoplankton by prey for larger fish and whales. Many planktonic copepods adopt a diel vertical migration. I concentrated on the dinoflagellate Dinophysis c.f. acuta as part of my primary producer in the food web. The Dinophysis c.f. acuta is a bigger more distinct species of dinoflagellate. One of its main prey is a ciliate. ...read more.

The food web shows the interactions between key species of plankton and Inorganic and Organic Matter. Bacteria is key in this food web as it takes up dissolved organic mater and inorganic matter, this in turns allows Hetrotrophic nanoflagellates to ingest organic matter, which is extremely important for growth. The Hetrotrophic nanoflagellates is either taken up by Helicostomella subulata, or dies and converts into Organic and Inorganic matter by bacterial work. Dissolved inorganic matter is also taken up by Chaetoceros c.f. decipens, which is also fed on by Helicostomella subulata. Skeletonema costatum takes up dissolved inorganic matter, which is then prayed upon by Flavella spp. This Flavella spp is taken up by Dinophysis c.f. acuta, Temora longicornis and Acartia c.f. clausi. It also secrets dissolved organic matter. Helicostomella subulata takes up Hetrotrophic nanoflagellates, Skeletonema costatum and Dinophysis c.f. acuta. The top 2 predators excrete Dissolved and particulate organic matter. Thus completing the food web. The mesh sizes we used did were not capable of catching smaller bacteria, nano/picoplankton. To do this we would have had to use smaller mesh sizes. To make the food web more quantitative we could have looked at rate of ingestion between species, include more species in the food web and see how concentration of specific species would alter the rate or life span of certain species. . ...read more.

Overall this had the potential to be a really nice write up: a wide variety of plankton have been identified, and a good amount of background reading done in each instance.

What it lacks though is:- An obvious results section, such as a list of species found
- A clear structure (perhaps going through trophic level by trophic level)
- A general separation of 'facts about this food web' vs 'facts about individual species'
- Some proofreading! (Lots of simple grammatical errors, or awkward phrasing make this frustrating to read).

As a result at my (Russell Group) university, this would score 3/5