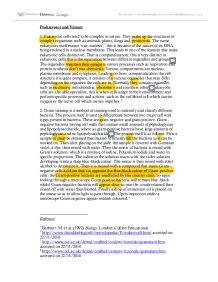 Prokaryotes and Viruses 1. Eukaryotic cells tend to be complex in nature. They make up the structures of complex organisms such as animals, plants, fungi and protoctista. The name eukaryotes itself means 'true-nucleus',1 this is because of the nature of its DNA being enclosed in a nuclear membrane. This leads to one of the features that make eukaryotic cells distinctive. That is compartalization; this is very distinct in eukaryotic cells this is the separation between different organelles and groups. The organelles maintain their groups to ensure processes such as respiration and protein synthesis don't mix chemicals. Various compartments are nucleus, plasma membrane and cytoplasm. Leading on from compartalization the cell structure it is quite complex, it consists of a various organelles that may differ depending on the organism the cells are in. Normally they contain organelles such as nucleuses, mitochondria, ribosome's and countless others. Eukaryotic cells are also able specialize, this is when cells adapt to their environment and perform specific processes and actions, such as the red blood cell which carries oxygen or the nerve cell which carries impulses.2 2. ...read more.

Then it is treated with a compound that stains Gram-negative cells a colour that's is opposite the blue-black colour of Gram-positive cells, the Gram-positive bacteria are unaffected by this counter stain. So upon looking through a microscope Gram positive bacteria will remain blue-black whilst Gram-negative bacteria will appear clear so must be counterstained then rinsed off with water then blotted. Finally a drop of immersion oil is placed on the smear so as to allow light to pass through. Upon inspection under a microscope Gram negative appear reddish coloured.4 This method is a very suitable method for indentifying bacteria but it is not perfect as there are so bacteria that do not simply adhere to the regulations of the Gram staining and are not easily identifiable. Over all it is a useful technique. 3. . Streptococcus pyogenes has a threadlike spherical structure and is cocci shaped . Corynebacterium diphtheriae has a palisade structure which is mainly rod shaped . ...read more.

This entire process is done to acquire immunity. 6. Synergy is known as cooperation of two or more individuals; in a synergistic relationship organisms can co-habit together and benefit from each other's presence. An example is that of the bacteria in a cow's stomach. The bacteria help the cow to digest plant material such as cellulose and in return the cow provides the bacteria with food. This is also known as symbiosis. A parasitic relationship is one where one of the organisms is of detriment to the other's health, in essence only one-person benefit from the relationship. An example of this is a tapeworm in intestine of a pig. The tapeworm feeds on the pigs digested food by absorption; this in turn weakens the pig and may even cause adverse effects. The main difference between the two is that in a parasitic relationship only one-person benefits and in the synergistic relationship both parties benefit. Reference: 1 Barbour, M. et al. (1997) Biology. London: Collins Educational 2 http://www.daviddarling.info/encyclopedia/E/eukarycell.html accessed on 22/11/2010 3 http://www.ncl.ac.uk/dental/oralbiol/oralenv/tutorials/gramstain.htm accessed on 22/11/2010 4 http://www.ncl.ac.uk/dental/oralbiol/oralenv/tutorials/gramstain.htm accessed on 22/11/2010 Dominic Areago ...read more.

Overall this piece of work covers the basic material, but loses marks for carelessness and lack of depth. The author has fallen into the trap of considering some of the questions 'things he already knows' and has provided an answer based on his A-level knowledge rather than exploring what is expected of him as an undergraduate. The references used are textbooks and lecture notes, rather than any primary literature.
At my (Russell Group) university this would score 3/5