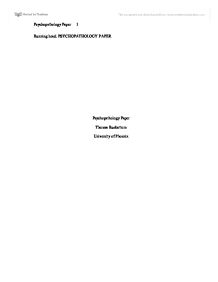 Psychopathology. In this paper I will be describing the origins of Abnormal Psychology, an overview of how Abnormal Psychology evolved into scientific discipline, and the theoretical viewpoints and the interpretations of the biological, psychosocial, and

Running head: PSYCHOPATHOLOGY PAPER Psychopathology Paper Theresa Ruebottom University of Phoenix Introduction In this paper I will be describing the origins of Abnormal Psychology, an overview of how Abnormal Psychology evolved into scientific discipline, and the theoretical viewpoints and the interpretations of the biological, psychosocial, and sociocultural models. Psychopathology Paper Origins of Abnormal Psychology "Is the branch of psychology that studies abnormal behavior and ways of helping people who are affected by psychological disorders (Nevid, 2006)." An abnormal behavior affects us all in one way or another. Such as, emotional stress like anxiety, depression or impaired behaviors. Even with the abilities to function, such as holding a job, or knowing from the reality or fantasy world is also considered an abnormal behavior at some point. Abnormal behaviors affect all people in different culture as well. For example, the traditional Native American cultures believe if they get sick from outside of their culture it is called "White man's sickness". Scientific Discipline Focuses on experiments, tests and assumptions and also gathering evidence that require observation and experimental methods. Such as, forming questions and testing the hypothesis, this is an "educated guess". ...read more.

The so called witches were people who had psychological disorders and were persecuted for their abnormal behavior. "With recognition of a need for the special treatment of disturbed people came the founding of various "asylums" toward the end of the sixteenth century. However, institutionalization brought the isolation and maltreatment of mental patients. Slowly this situation was recognized, and in the eighteenth century, further efforts were made to help afflicted individuals by providing them with better living conditions and humane treatment, although these improvements were the exception rather than the rule. The reform of mental hospitals continued into the twentieth century, but over the last four decades of the century there was a strong movement to close mental hospitals and release people into the community. This movement remains controversial here in the early part of the twenty-first century (Butcher, Mineka, and Hooley)". In recent years, many theorists have come to recognize the need for a more integrative biopsychosocial viewpoint that acknowledges that biological, psychosocial, and sociocultural actors all interact and play a role in psychopathology and treatment. Biological Griesinger and Kraepelin attempt to explain abnormal behaviors on the basis of underlying biological defects or abnormalities, not evil spirits. ...read more.

Some theorists believe the causes of abnormal behavior may be found in failures of society rather than the person themselves. Such as not being able to get a job, being poor, and even a family breakup like a divorce. "Sociocultural theorists also observe that once a person is called "mentally ill," the label is hard to remove. It also distorts other people's responses to the "patient." Mental patients are stigmatized and marginalized. Sociocultural theorists focus our attention on the social consequences of becoming labeled as a "mental patient." They argue that we need to provide access to meaningful societal roles, as workers, students, and colleagues to people with long-term mental health problems, rather than shut them aside (Nevid, 2006)". Conclusion After going through the history of abnormal behaviors, times have changed. Society does not take much in account for witchery as the people did in the earlier centuries. For mental disorders like schizophrenia, the society tries to help them instead of locking them away from society. So all in all the society has changed some but not as much as people think. Society still labels people, no matter how they look. There are more medication and alternative drugs for the mentally ill and there is also different ways to treat patients such as therapy. ...read more.