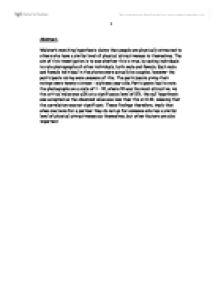 Abstract: Walster's matching hypothesis claims that people are physically attracted to others who have a similar level of physical attractiveness to themselves. The aim of this investigation is to see whether this is true, by asking individuals to rate photographs of other individuals, both male and female. Each male and female individual in the photos were actually be couples, however the participants rating were unaware of this. The participants giving their ratings were twenty sixteen - eighteen year olds. Participants had to rate the photographs on a scale of 1 - 10, where 10 was the most attractive. As the critical value was o.56 at a significance level of 5%, the null hypothesis was accepted as the observed value was less than this at 0.42, meaning that the correlation was not significant. These findings therefore, imply that when one looks for a partner they do not go for someone who has a similar level of physical attractiveness as themselves, but other factors are also important Introduction: The matching hypothesis was originally proposed by Walster et al in 1966. This hypothesis simply argued that we are attracted to people who have a similar level of physical attractiveness and attributes, such as intelligence and athleticism. ...read more.

Photographs of white couples were collected from sources such as the internet, magazines and newspapers. The couple's photos were cut so that one could not identify which couples were together. Each individual was labeled so that for our benefit we new which couples were together. 2. Twenty participants were selected using an opportunity sample between two year groups. As the group of population chosen to take part in the experiment was under the age of eighteen, letters of consent were sent home to parents to receive permission for participants to take part in the experiment. 3. Before the experiment took place participants were given information on the date, time and place the experiment would be held. 4. An explanation was given before on what the participant's involvement would be in the experiment and then any questions that the participants asked were answered. 5. The first participant was sent into the experimental room at random. There they were given an instruction sheet (appendix2 ). They were shown twenty pictures of couples and had to rate their level of attractiveness on a scale of 0 to 10, where 0 was unattractive and ten 10 was attractive. ...read more.

Limitations and Modifications One of the limitations of the study was that as the photographs had been taken from magazines, newspapers and internet, there was no guarantee that the couples were actually couple in real life. Also, the qualities of the photographs should be taken into account; it may be that because they had been cut out, and were in black and white, this did not help the participants when they rated the photographs. Another problem with the study was that the participants who were sixteen - eighteen year olds might perceive physical attractiveness differently to members of couples. Implications and suggestions for future research: These findings imply that an investigation concerning the matching hypothesis should be carried using a particular method. Therefore when deciding what participants should be used, if the study was to be carried out again it would be better if individuals who were in a couple rated each other and themselves to see whether couples have the same level of physical attractiveness to each other. Also a longitudinal study could be carried out looking at individual and the relationship they have over a long period of time, then seeing whether they continue to form relationship with those who are similar to them where physical attractiveness is concerned. ...read more.