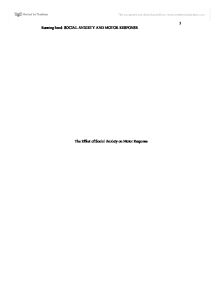 The Effect of Social Anxiety on Motor Response The Effect of Social Anxiety on Motor Response Clarke and Wells (1995) put forward a cognitive model of social phobia to explain the processes that takes place when certain individuals enter a social situation. Their model demonstrates how increased self focused attention and decreased processing of external social cues can lead to the experience of social phobia. Based on such cognitive models of social anxiety, Hofmann (2007) determined that one of the primary drivers of this disorder is misguided self-focussed attention. Ledley and Heimberg (2006) stated that socially anxious individuals take on an observer's perspective and tend to be internal spectators of themselves. Zou, Hudson, and Rapee (2007) found that high-blushing socially anxious individuals demonstrate elevated levels of self-focussed attention; in the form of excessive focus toward their external appearance, thoughts, feelings, and behaviours. It is believed that such self-focussed attention is integral to the maintenance of social anxiety as it exacerbates the self awareness of negative mental representations conducive to producing anxiety and excludes the processing of any positive social feedback (Moscovitch, Kim, & Taylor, 2004; Pineles & Mineka, 2005). McEwan and Devins (1983) noted that highly anxious participants actually overrated how their anxiety would appear to others in their social setting. Similarly, research by Mansell and Clark (1999) found a positive correlation connecting perceived anxiety of the participant and the degree to which they overrated how their appearance would be negatively interpreted. Further to this, a study conducted by Mellings and Alden (2000) found a positive correlation existed for participants with high levels of social anxiety, linking self focused attention during social interaction and overrating of how their anxiety-behaviours would be interpreted by those they interacted with. ...read more.

Increased neural activation and emotional modulation, occurring in early processing, can thus favour the likelihood of neural representation of these stimuli over their neutrally competitive counterparts (Pessoa et al., 2002). Mogg and Bradley (1999) suggest that the automatic orienting to threat stimuli outside conscious awareness is a reliable phenomenon and measurable physiological responses have been observed under sub-threshold conditions. As would be expected, anxiety prone individuals display a higher prevalence for threat superiority effects to such stimuli (Mogg & Bradley, 1999). There is evidence for preattentive analysis of facial expression for emotions such as anger (Fox et al., 2001). Angry faces have been shown to elicit greater threat-dependent neural responses than do sad faces (Bradley et al., 2000). Such research provides some evidence for the preconscious automatic activation of emotional response and the ensuing capture of attention (Pessoa et al., 2002; Ohman et al., 2001). The research clearly suggests there is an identifiable social anxiety-based link between a preconscious recognition and environmental threats such as angry faces. It is also evident that when such preattentive recognition occurs there is an associated temporary freeze response of motor action. Furthering the work of Miskovic and Schmidt (2011) this study will investigate how socially anxious individuals respond to specific environment cues and the temporal effects, if any, on their physical motor sensory response. The question is posed; do individuals who demonstrate higher levels of social anxiety also demonstrate slower motor responses when confronted with 'fearful' sub-threshold visual stimuli whilst carrying out a routine motor task? Method Participants In accordance with the UWS Research Code of Practice, 60 - 100 participants will be recruited for this study, and divided into two groups, A and B, of between 30 - 50, allowing for an even spread of participants per group. ...read more.