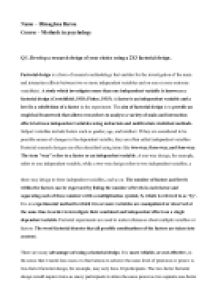 Both the British empiricists and the French sensationalists believed that all knowledge is gained by experience and that there are no inherent ideas. They said that all knowledge, including moral knowledge, was drawn from personal experience. The only thing we can be assured of, according to Comte, is what is socially observableâ€”that is, sense experiences that can be shared with others. Science's data are publicly accessible and can be relied. Scientific laws, for example, are statements about how observational events differ together, and once established, they can be experienced by anyone who is involved. Positivism was identified after Comte's emphasis on associating knowledge with empirical observations. The belief that science can only look at things that can be directly experienced. That meant publicly witnessed events or overt actions for Comte. Qualitative and quantitative research are often depicted as diametrically opposed and as distinct as they can be. The aim of qualitative research is to describe the qualities (or characteristics) of data. The importance of quantitative research in psychology cannot be underestimated. In reality, quantification characterizes most psychology more accurately than the discipline's subject matter. The divide between qualitative and quantitative research is more apparent than real. Quantitative research is a form of research that uses statistical, logical, and mathematical techniques to produce numerical data and hard facts. Quantitative research focuses on quantifying (or assigning numbers to) ...read more.