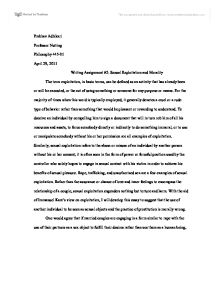 Prabhav Adhikari Professor Nutting Philosophy 445-01 April 29, 2011 Writing Assignment #2: s****l Exploitation and Morality The term exploitation, in basic terms, can be defined as an activity that has already been or will be executed, or the act of using something or someone for any purpose or means. For the majority of times when this word is typically employed, it generally denotes a cruel or a rude type of behavior rather than something that would be pleasant or rewarding to understand. To deceive an individual by compelling him to sign a document that will in turn rob him of all his resources and assets, to force somebody directly or indirectly to do something immoral, or to use or manipulate somebody without his or her permission are all examples of exploitation. Similarly, s****l exploitation refers to the abuse or misuse of an individual by another person without his or her consent; it is often seen in the form of power or forceful position used by the controller who solely hopes to engage in s****l contact with his victim in order to achieve his benefits of s****l pleasure. ...read more.

This situation highlights immorality because the wife has been devalued as a human being, and has only been treated as an "object of their appetite, who after being "possessed and the appetite sated, they are thrown away" (Kant, 156). Instead, the husband should seek to fulfill his obligations to satisfy his wife and equally provide her with her share of o****m; not doing so would only lead the woman to feel as though she was only used. Moreover, it is safe to say that if oppositions occur between a husband who wants s*x and the wife who has no desire for it, and the man continues to force himself down on her, which would later lead the woman to become pregnant and the decision to abort of the child, such actions would also be judged immoral. Now, let's take prostitution for example, which serves as a basis for defiance of the Kantian Categorical Imperative, in which Kant discusses the duties of man to himself. ...read more.

One of these is the understanding that an individual may not have his right to s******y touch a girl's body even when love exists between the two. Particularly in countries like America, if an individual uses a girl for his sheer pleasure without using safety measures (i.e. condoms), severe punishments are ruled for the crime committed. The sentence handed down on the criminal is absolutely compulsory because there are people in this world who use a girl just to acquire their justice (i.e. from an old revenge), or just because they wish to use the body of a girl for the sake of seeking rest from their frustration (i.e. practices of objectification and prostitution); and, we can't allow such dangerous individuals to roam about in our respected communities. However, the key here is to comprehend that this behavior is not called love because there are no feelings involved. It is only when the feelings originate mutually from both sides and the agreement of permissibility to have s*x is thus made, that couples can find happiness and mutual s****l arousal in their relationships. ...read more.