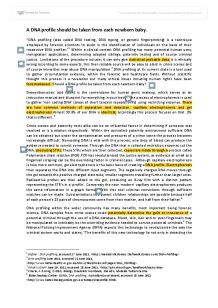 Should a DNA profile be taken at birth?

A DNA profile should be taken from each newborn baby. "DNA profiling (also called DNA testing, DNA typing, or genetic fingerprinting) is a technique employed by forensic scientists to assist in the identification of individuals on the basis of their respective DNA profiles."1 Within a clinical context DNA profiling has many potential human uses; immigration applications, determining adopted siblings, paternity testing and of course criminal justice. Limitations of the procedure include; it can only give statistical probable data, it is ethically wrong according to some experts, this then reliable source will be easy to plant in crime scenes and of course minorities may abuse DNA manipulation.2 DNA profiling at its current state is a tool used to gather circumstantial evidence, within the forensic and healthcare fields. Without scientific thought this process is a revelation but many ethical issues including human rights have been foreshadowed. Should a DNA profile be taken from each newborn baby? Deoxyribonucleic acid (DNA) is the cornerstone for human genic makeup, which serves as an instruction manual and blueprint for everything in your body. The process of electrophoresis is used to gather 'non coding DNA' (areas of short tandem repeats, STRs) ...read more.

DNA samples from crime scenes could potentially determine the guilt or innocence of a potential criminal through the use of a DNA database. Blood, skin, hair and or even fingernails may be manipulated to inevitably be the overriding evidence needed to convict potential criminals.5 The National Policing Improvement Agency (NPIA) expects this technology to revolutionise the way the criminal system works and states; "The benefits of this new technology lie not only in detecting the guilty swiftly but also in eliminating the innocent from police inquiries."6 Another useful advantage of DNA profiling is disaster victim identification. Through the production of a DNA database forensic scientists would be able to identify the body through DNA obtained from body parts or teeth. This process would be revolutionary as it is often difficult to identify victims after disasters such as bombing or fires. DNA profiling is also a useful tool in the paternity sector. Substantial chromosome matches can determine paternity ties, analysing and exploring family relationships. Advancements in technology are ongoing, but according to Bristol Universities Professor Jean Golding of Avon's Longitudinal Study of Parents and Children; "Provided the proper safeguards are in place - the benefits to ...read more.

Overall this essay is quite confused. The understanding of the technical aspects is lacking, and the technical parts are mixed in with the moral parts without there being any clear structure. 3 stars.