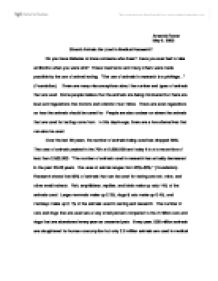 Should Animals Be Used in Medical Research?

Amanda Rosen May 6, 2003 Should Animals Be Used in Medical Research? Do you have diabetes or know someone who does? Have you ever had to take antibiotics when you were sick? These treatments and many others were made possible by the use of animal testing. "The use of animals in research is a privilege..." (Foundation). There are many misconceptions about the number and types of animals that are used. Some people believe that the animals are being mistreated but there are laws and regulations that doctors and scientist must follow. There are even regulations on how the animals should be cared for. People are also unclear on where the animals that are used for testing come from. In this day-in-age, there are a few alternatives that can also be used. Over the last 30 years, the number of animals being used has dropped 60%. The uses of animals peaked in the 70's at 5,500,000 and today it is at a record low of less than 2,650,000. ...read more.

(Biomedical). The information gained from these animal experiments help scientist design human trials. Doctors and scientist know that it is a privilege to use animals in research. The use of the animals is helping unlock the mysteries of diseases that plague us everyday. Scientists know that a well-treated, healthy, and protected from undue stress animal provides better results than that of an animal that is mistreated. Animal testing is done in a controlled environment only. There are federal guidelines that prohibit the abuse or the use of sick, injured, or distressed animal as research subjects. Anti-animal testing groups say that animals are tested without any anesthetics. This happens when the experiments involve mild or momentary distress. For example, giving a single injection, taking a blood sample, or a change of diet. If an experiment might cause an animal pain, then aesthetics and/or painkillers are given to the animal. Similar studies are done on both humans and animals both involving little or no pain. Animals that did not have any tissue removed may take part in additional experiments. ...read more.

There is some need for cats and dogs but most of the lab animals are rodents that have been specifically bred for the uses of medical research. Using unwanted pets is illegal in the United States. If a scientist were to use random animals from the wild, it would make the test results less reliable. Today everything is done by computers, so why not animal testing? There are scientists that do not like to use animals for testing or research. There is funding for the uses of alternative research methods. Some of these methods include test-tube and cell culture experiments in addition to computer simulations. These methods are used along with animal testing and research. Computers can be very helpful in doing the math needed. But computers cannot work or think on their own. They can only work with what has been put in them - what you already know. A different approach might be that the scientist would use mice instead of rabbits for their research. Throughout the 20th century every major medical advancement was accomplished with research and testing on animals. Looking at the total work that biomedical researchers do, only 10% of the time are they using animals. ...read more.