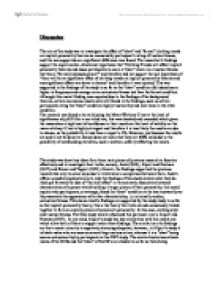 Discussion The aim of the study was to investigate the effect of "chav" and "formal" clothing trends on implicit personality theories as measured by participant's rating of trustworthiness, and this was supported as a significant difference was found. The researcher's findings support the experimental, directional hypothesis that "Clothing Trends will affect implicit personality theories and cause participants to score a "chav" lower on a trustworthiness test than a "formally dressed person"" and therefore did not support the null hypothesis of "there will be no significant effect of clothing trends on implicit personality theories and any significant effects are down to chance" and therefore it was rejected. This was supported in the findings of the study in so far as the "chav" condition did indeed score higher in frequency and average on an untrustworthiness test than the formal condition. Although this overall finding was expected due to the findings of the background theories, certain anomalous results were still found in the findings, such as certain participants rating the "chav" condition highly trustworthy and vice versa in the other condition. The research was found to be valid using the Mann-Whitney-U test at the level of significance of p?0.01 for a one tailed test, this ...read more.

Allport's test also involved recall which makes the findings difficult to compare with the 2007 study. Although both results greatly support one another, there are limitations The 2007 study has, like all studies, a few limitations in validity. Due to the sample being chosen purely on opportunity, it led to a slight bias in gender with 17 men and 13 women taking part. This could have led to bias as a female model was used for the photographs in the conditions and factors such as s*x appeal, jealousy and self-comparison may have unfairly affected the findings, this could have been avoided by using a stratified sample of a single gender. For the same reason it is possibly unfair that both female and male researchers were used in collecting results as this may cause a gender bias, this could be avoided by simply using just one gender of people in collecting results. Confounding variables such as it being a sunny Sunday afternoon may have affected the results as participants could have rushed the survey - this is a possible problem in the method, this could be avoided by conducting a completely lab based study in which participants could plan their time and therefore not rush. ...read more.

I would hypothesise "participants will stereotype a chav as a poor, crime committing, alcohol drinking person over someone with kind characteristics" I would conduct this by creating two profiles containing life experiences and typical behaviours and asking a participant to categorize them both with 1 word, then add 2 un cued characteristics to the profile so as the researcher could try and find links in the qualitative data which would be highly accurate as they are participant's un cued, hopefully un bias views. Although I may get vast amounts of unrelated data, the qualitative data gained would give a far more interesting insight into the true stereotype of "chav" In this investigation the experimental hypothesis was "the chav dressed condition will receive a higher rating of untrustworthiness, than that of the formal dressed condition" and the null hypothesis was "there will be no significant effect of clothing trends on implicit personality theories and any significant effects are down to chance". Methodological criticisms mean validity and reliability is questionable. Thus, conclusions must be made cautiously as there is a need for further and improved research. However, it can be concluded that the experimental hypothesis was accepted and the "chav" condition was indeed negatively stereotyped against. ...read more.