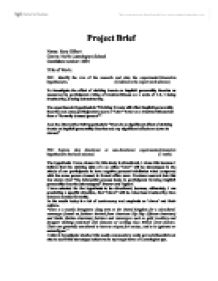 To investigate the effect of clothing trends on implicit personality theories as measured by participants rating of trustworthiness on a scale of 1-5, 1 being trustworthy, 5 being untrustworthy.

The hypothesis I have chosen for this study is directional, I chose this because I believe that the clothing style of a so called “chav” will be stereotyped in the minds of our participants to have negative personal attributes when compared with the same person dressed in formal office wear. Previous research into this has shown that “the inferential process leads to participants forming implicit personality theories (stereotypes)” Bruner and Tagiuri.

I have selected for the hypothesis to be directional, because, ultimately, I am predicting a specific direction, that “chavs” will be rated less trustworthy than someone dressed formally.

In the media today is a lot of controversy and emphasis on ‘chavs’ and their culture.

“Chav is a mainly derogatory slang term in the United Kingdom for a subcultural stereotype fixated on fashions derived from American Hip-Hop (African-American) and Guido (Italian-American) fashions and stereotypes such as gold jewellery and designer clothing combined with elements of working class British street fashion. Chavs are generally considered to have no respect for society, and to be ignorant or unintelligent.”

I wish to investigate whether this media commentary could prove influential and also to see if this stereotype holds true in my target town of Leamington spa.

In the study the researcher will use an experimental method of research in using surveys to collect data and also used an independent groups design so as to avoid any unfair influence within the study.

The research method chosen to conduct the study is experimental and the design used is independent groups. The advantages of using an experimental research method are that the researcher can reasonably control cause and effect, and therefore increase reliability of results An advantage of using independent groups design is that participants only experience one condition and it is therefore impossible for them to be influenced by the other condition in guessing the research aim and therefore reduces demand characteristics.

A disadvantage of using an experimental research method is that the participants are aware they are taking part in a study and may act differently so as to give socially desirable results rather than their true opinion. A disadvantage of independent groups design is that because only 1 out of the 2 sets of participants experience each condition, confounding variables are more likely to occur such as varying participant mood or pre-test bias towards a certain condition.

1)  Researcher bias can be easily controlled by using the standardised procedure and instructions, as this allows no opportunity for the researcher to influence the participant one way or another. To prevent the participants being aware of the experiment we will try include data, and questions which are not linked to what we are trying to find out, but this could change the results participants would of perhaps before hand chosen.

2) The experimenter will use distraction techniques, i.e. other rating scales for distracter attributes in order to get around the fact that there is a possible chance participants may guess the nature of the experiment and so respond to the demand characteristics. The independent groups design shoudo reduce this.

3) even though they are using a opportunity sample, we will have to make sure that we take into account times and places of taking the sample, eg not by a school, at home time, other why the sample would be aged bias. In other words, the experimenter is aiming to control subcultures in participants to an extent. Sunday afternoon was chosen because a smaller number of possible participants would be pre-occupied by work or school (except those in retail) so it reduces sample bias.

4) Standardisation controls against any bias in the materials also.

5) Because the researcher has chosen to use the Likert scale in the collection of data, this prevents opinions, objective questions, and subjective answers.

6) Due to the nature of the results being quantative, this reduces biased opinions getting into the results and makes the findings standardised.

PB7:        Select an appropriate level of statistical significance to be reached before the

The minimum conventional level of significance to be accepted is p≤ 0.05 to ensure a useful finding.

Protection of participants is important as they may feel uncomfortable in making judgments about the model in the photographs, whether they are negative or positive, on different types of people, this could be seen as rude/unfair so I shall keep my findings confidential. Of course as well as this participants have the right to withdraw themselves or their results at any time from the study.

The experiment is of a deceptive nature, because the participants are not aware of what they are participating in before hand, this can be avoided by making sure presumptive consent is gained beforehand.

A debrief is also required in order to avoid many of these ethical implications and to also make participants aware of what they have taken part in and the nature of the experiment and findings. This is highly positive because it allows people to learn from my findings and make it truly worthwhile but also to reassure them that their views are not abnormal and give them peace of mind.