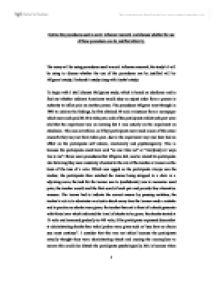 sociology influence.Outline the procedures used in social influence research, and discuss whether the use of these procedures

Outline the procedures used in social influence research, and discuss whether the use of these procedures can be justified ethically. The essay will be using procedures used in social influence research, the study's I will be using to discuss whether the use of the procedures can be justified will be Milgram`s study, Zimbardo`s study along with Aschs`s study. To begin with I shall discuss Mailgrams study, which is based on obedience and to find out whether ordinary Americans would obey an unjust order from a person in authority to inflict pain on another person. The procedures Milgram went through in 1963 to achieve the findings, he first obtained 40 male volunteers from a newspaper which were each paid $4.50 to take part, each of the participants which took part were told that the experiment was on learning but it was actually on the experiment on obedience. This was not ethical; as if they participants were made aware of the actual research they may not have taken part, due to the experiment may also have had an affect on the participants self esteem, emotionally and psychologically. ...read more.

even all that persons life, the right procedures that Milgram did is he told the participants at the end when they were returned and gave a full debriefing. Another study I will be using is Zimbardo's, which is on conformity in 19973. Zimbado's aim was to see if ordinary people when placed in a prison environment and some off them were designated as guards and other prisoners, how would they behave? The procedure's that Zimbardo went threw was he used male students which volunteered for a psychological study of 'prison life', and were paid �15 a day. The 24 most stable physically and mentally men were selected and randomly assigned to being a prisoner or a guard. There were two reserves and 1 drop out, finally leaving 10 prisoners and 11 guards. The prisoners were unexpectedly arrested at home. On entry to the prison they were put through a delusion procedure, searched, given a prison uniform with ID number, nylon shocking caps and an ankle chain. ...read more.