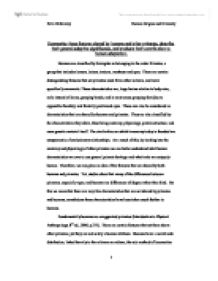 Summarise those features shared by humans and other primates, describe their general adaptive significance, and evaluate their contribution to human adaptation.

Summarise those features shared by humans and other primates, describe their general adaptive significance, and evaluate their contribution to human adaptation. Humans are classified by biologists as belonging to the order Primates, a group that includes lemurs, lorises, tarsiers, monkeys and apes. There are certain distinguishing features that set primates aside from other animals, and more specifically mammals. These characteristics are, large brains relative to body size; nails instead of claws; grasping hands, and in most cases grasping feet (due to opposable thumbs); and frontally positioned eyes. These can also be considered as characteristics that are shared by humans and primates. They are also classified by the characteristics they share, these being anatomy, physiology, protein structure, and even genetic material itself. The similarities on which taxonomy today is founded are symptomatic of evolutionary relationships. As a result of this, by looking into the anatomy and physiology of other primates we can better understand what human characteristics we owe to our general primate heritage and what traits are uniquely human. Therefore, we can glean an idea of the features that are shared by both humans and primates. ...read more.

It was probably as arboreal animals relying on visual predation of insects that primates developed this coordination, in order to grasp the branches, watch their prey closely and then catch it. There is much general adaptive significance to the shared characteristics of primates and humans. However, there are a few that are of greater significance, the opposable thumb and toe; the eyes and brain; family size; dentition; and nails in place of claws. The opposability of the thumb and toe has, for primates, been vital when grasping either objects or branches. Some chimpanzees are known to be able to use tools, and the evolution of the opposable thumb has made using tools for primates far easier. Many primates are also known to be arboreal, such as many of the strepsirhines (e.g. Lemurs), the ability to grasp branches again makes living in the trees much easier, and it facilitates the movement on or between trees. Linked closely to this is the adaptation of nails. This is particularly important for the smaller primates such as Lorises. Much of the food that primates require tends to be located at the further reaches of a branch, which tends to be much thinner than closer to the trunk. ...read more.

This could also be, in some ways, linked to the evolution and adaptation of taste perception, which has come from our primate ancestors, who required taste perception to avoid eating potentially toxic leaves or other food. Also the development of the opposable thumb has had a large adaptive significance for humans. As we know it allows for the grasping of branches and, more importantly for humans, objects. This has allowed humans to make use of tools and weapons, which in turn has allowed us to hunt much more efficiently, adding to our chances of survival and creating time to develop in other ways, such as technologically. This distinct benefit is coupled with the fact that humans have developed much larger brains. Therefore, there is an obvious advantage over other animals as we can coordinate hunting more efficiently. In conclusion to this, though, there is not that great a link between the characteristics that humans and primates share and human adaptation. Many of the traits that primates have merely primitive forms of those that humans have, and therefore humans are better adapted to living all over the globe, whereas primates are still predominantly a topical animal. ...read more.