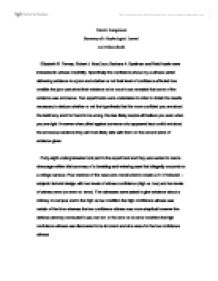 Summary of a Psychology Journal

Tutorial Assignment Summary of a Psychological Journal Joel Falken-Smith Elizabeth R. Tenney, Robert J. MacCoun, Barbara A. Spellman and Reid Hastie were interested in witness credibility. Specifically the confidence shown by a witness whilst delivering evidence to a juror and whether or not their level of confidence affected how credible the juror perceived their evidence to be once it was revealed that some of the evidence was erroneous. Two experiments were undertaken in order to obtain the results necessary to deduce whether or not the hypothesis that the more confident you are about the testimony and it is found to be wrong, the less likely people will believe you even when you are right. However when pitted against someone who appeared less confident about the erroneous evidence they will more likely side with them on the second piece of evidence given. Forty-eight undergraduates took part in the experiment and they were asked to read a nine-page written trial summary of a breaking-and-entering case that allegedly occurred on a college campus. ...read more.

For example the witness who was asked to be confident may have displayed this behaviour in such a way that they appeared cocky which could have led to the jurors being less likely to believe them due to their first impression. A series of experiments by Princeton psychologists Janine Willis and Alexander Todorov have shown that all it takes is a tenth of a second to form an impression of a stranger from their face, and that longer exposures don't significantly alter those impressions. Elizabeth R. Tenney, Robert J. MacCoun, Barbara A. Spellman and Reid Hastie could have used more witnesses during the experiment whilst repeating it in order to get a fairer representation of the population. The fact that the experiment was not real and the participants knew that would also have led to certain demand characteristics and without the thought that there are real consequences the participants may not have taken it as seriously and simply tried to conform to what they believed the experimenter was trying to find. ...read more.