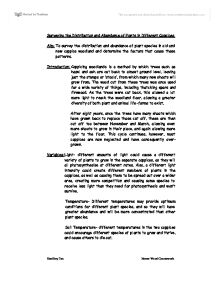 Surveying the Distribution and Abundance of Plants in Different Coppices

Surveying the Distribution and Abundance of Plants in Different Coppices Aim: To survey the distribution and abundance of plant species in old and new coppice woodland and determine the factors that cause these patterns. Introduction: Coppicing woodlands is a method by which trees such as hazel and ash are cut back to almost ground level, leaving just the stumps or 'stools', from which many new shoots will grow from. The wood cut from these trees was once used for a wide variety of things, including thatching spars and firewood. As the trees were cut back, this allowed a lot more light to reach the woodland floor, allowing a greater diversity of both plant and animal life-forms to exist. After eight years, once the trees have many shoots which have grown back to replace those cut off, these are then cut off too between November and March, allowing even more shoots to grow in their place, and again allowing more light to the floor. This cycle continues, however, most coppices are now neglected and have consequently over-grown. Variables: Light- different amounts of light could cause a different variety of plants to grow in the separate coppices, as they will all photosynthesise at different rates. ...read more.

Plan- I have already studied ecology at school, and in preparation for this investigation, we carried out an experiment on the school field, examining the distribution of broad-leaved plants in two differently managed areas. The sampling techniques used when carrying out this experiment were modified and improved for the investigation in Nower Wood, in order to achieve more accurate results. In carrying out the investigation, a sample count was taken instead of a total count. This was because even though it isn't as accurate, a total count would've taken too long. Therefore, to ensure the sample count taken was as representative as possible, we decided to take as many random samples, doing all the experiments at each quadrat, as we could, and then find their overall average. Methods- First, a grid was created on each of the coppices. Random values were taken, which were then used to create a grid reference from where readings would be taken. At each grid reference, a group would lay a quadrat down, and the percentage cover of each different plant species present was noted, as well as the light cover and the percentage of organic matter present. ...read more.

Also, these results aren't necessarily representative of all old and new coppices across the world, and may in fact be false. There were a few anomalous results, as shown in the fact that our group's results discovered less plant species in the new coppice than in the old. These can be attributed to the fact that some of the quadrats had to be placed in areas where only one type of species was present (e.g. in a bush). Also, results from the quadrats may have been wrong since the two coppices had been used the previous day, resulting in much of the area being flattened by people walking over them. Another contributing factor to anomalous results may be that the areas examined aren't simply 2-D surfaces, they have an upper layer of plants which covers up lower layers, which potentially 'house' many more plant species and also that it may have been the wrong time of year to see the full diversity of each of the coppices. Plant identification was also quite poor generally as many plants looked very similar to the untrained eye. In order to ensure that the survey was a lot more accurate, we could watch many old and new coppices over time, recording the results and finding an overall average creating much more representative figures of old and new coppices. Geoffrey Tan Nower Wood Coursework ...read more.