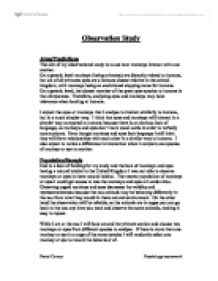 The aim of my observational study is to see how monkeys interact with one another.

Observation Study Aims/Predictions The aim of my observational study is to see how monkeys interact with one another. On a genetic level monkeys (being primates) are distantly related to humans, but out of all primates apes are a humans closest relative in the animal kingdom, with monkeys being an evolutional stepping stone for humans. On a genetic level, the closest member of the great apes species to humans is the chimpanzee. Therefore, analyzing apes and monkeys may have relevance when looking at humans. I expect the apes or monkeys that I analyse to interact similarly to humans, but in a much simpler way. I think that apes and monkeys will interact in a simpler way compared to humans because there is an obvious lack of language, as monkeys and apes don't have vocal cords in order to verbally communicate. Even though monkeys and apes lack language I still think they will form relationships with each other in a similar way to humans. ...read more.

I also predicted that there would be a difference in the way different types of monkey and ape interacted; I proved this correct with my results. However this may only apply to monkeys in captivity, they could act differently in their natural environment Evaluation There aren't very many strengths about this study. The study was reliable as it can be easily repeated. However, there were a lot of weaknesses; it has a low ecological validity as it is not very true to real life. The study is also unrepresentative as the findings cannot be generalised. Another good thing about my study is that inter-observer reliability was present meaning that, even though my results were not representative, they were accurate because I compared them to someone else's. To improve my investigation I could have observed animals in their natural environment, also I could have carried it out covertly in order to get more accurate results and prevent demand characteristics. I could have also observed a closer relation to the human species (e.g. chimpanzees). Daniel Comey Psychology coursework ...read more.