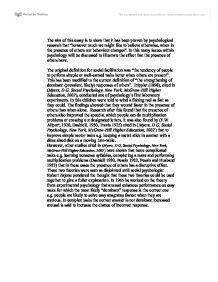 The aim of this essay is to show that it has been proven by psychological research that &quot;however much we might like to believe otherwise, when in the presence of others our behaviour changes&quot;.

The aim of this essay is to show that it has been proven by psychological research that "however much we might like to believe otherwise, when in the presence of others our behaviour changes". In this many issues within psychology will be discussed to illustrate the effect that the presence of others have. The original definition for social facilitation was "the tendency of people to perform simple or well-earned tasks better when others are present". ...read more.

The findings showed that they wound faster in the presence of others than when alone. Research after this found that the presence of others also improved the speed at which people can do multiplication problems or crossing out designated letters. It was also found by (F.W Allport, 1920, Dashiell, 1930, Travis 1925) cited in (Myers, D G, Social Psychology, New York, McGraw-Hill Higher Education, 2002) ...read more.

that in these cases the presence of others has a disruptive effect. These two theories were seen as disjointed until social psychologist Robert Zajonc pondered the thought that these two theories could be used together to give a fuller explanation. In 1965 he worked on the theory from experimental psychology that arousal enhances performance on easy tasks for which the most likely "dominant" response is the correct one e.g. people are likely to solve easy anagrams fastest when they are anxious. In complex tasks the correct answer is not dominant increased arousal is said to increase the chance of incorrect response. ...read more.