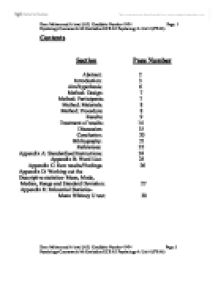 The aim of this investigation was to investigate if 'chunking' in STM will be affected by the speed of verbal progression through a word list.

Contents Section Page Number Abstract: 2 Introduction: 3 Aim/hypothesis: 6 Method: Design: 7 Method: Participants: 7 Method: Materials: 8 Method: Procedure: 8 Results: 9 Treatment of results: 14 Discussion: 15 Conclusion: 20 Bibliography: 21 References: 22 Appendix A: Standardised Instructions: 24 Appendix B: Word List: 25 Appendix C: Raw results/Findings: 26 Appendix D: Working out the Descriptive statistics- Mean, Mode, Median, Range and Standard Deviation: 27 Appendix E: Inferential Statistics- Mann Whitney U test: 30 Abstract The aim of this investigation was to investigate if 'chunking' in STM will be affected by the speed of verbal progression through a word list. My hypothesis was that 'The faster the reader verbally progresses through the wordlist the greater the participants 'chunking'. This involved twenty participants, ten in each of the two test conditions with an equal proportion of males and females for each condition. They were divided in two groups and were both read the same word list individually in one isolated quite room. Group A had no pause between each word and the word list was read out as one long sentence, whereas Group B had a three-second pause between each word in the word list. They were both asked to write down as many words as they could recall virtually immediately after the last word. The investigation showed that a faster rate of verbal progression through the word list, gave a substantially higher rate of recall than when there was a pause of three-seconds between each word. Therefore, the faster speed of progression caused an increase in 'chunking' which in turn increased storage and recall. This was concluded statistically with the utilisation of the Mann Whitney U test, which calculated an observed value of U of 26.5. This was below the p<0.05 critical value for U of 27. So this resulted in the alternate hypothesis of "The faster the reader verbally progresses through the wordlist the greater the participants 'chunking' and recall from STM's limited capacity of 7+/-2 chunks" being supported by the ...read more.

* As soon as final word is read participant asked to write down remembered words. * Debrief and ask for consent. * Escort participant out to prevent interaction with other participants. * Repeat until all participants tested. Results The table below in a presentation of the descriptive statistics calculated from the collected raw data. As there were no outliners in my raw data to cause distortion, the mean provided a suitable descriptive statistic. Although the sample size was small, the data were at interval level, which allowed the mean a suitable statistic. The median was another suitable average. However, the median disregards individual exact values of each item from the data set. The mode, another descriptive statistic can be utilised to calculate the most frequently occurring item in each data sit, however like the media it also disregards individual exact values of each item from the data set. Descriptive Statistic Condition A: Condition B: Mean 6.3 5.5 Median 6 6 Mode 6 6 Standard Deviation 0.64 0.92 Range 3 4 Below is a table that shows the values for the Mann Whitney U test, in order to help determine if my results show significance. Critical Value for 'U' at P< 0.05, N1=10. N2=10. Calculated (Observed) value for U, from current data 27 26.5 As you can see that since the calculated(observed) value from the Mann Whitney U test (appendix F) is less than the critical value, the difference in recall between the two sets of participants, from Condition A (list read out like a sentence) and Condition B (three second pause between each word) is statistically significant and not due to chance. Presentation of Summary Results Below are bar graphs to show the corresponding mean, mode and median values for both Condition A and Condition B Further presentation of Summary Results The frequency polygon below allows us to view the difference in participants' performance from the two tests. As we can see clearly that the distribution for Condition A (no pause between each word) ...read more.

Participants in group A would be given a set of cue words, then instructed to group certain cue words together, and then read the grouped words out loud at fast paces. Then participants in group B would be a control group that would simply be asked to read out words to themselves with pauses between each word for ten minutes. They would then be given an exam on the literature that would be covered by all the cue words specified. Then the two sets of results would be statistically analyses and compared. In general, Step Group A Group B 1 Read/Handed out literature 2 Given list of 10-15 cue words 3 Given revision exercise. Exercise= Group cue words together as words and repeatedly read them to yourself at fast paces. For ten minutes. Given revision exercise. Exercise= Repeatedly read out cue words with a certain(specified) time gap between them For ten minutes 4 Given short ten minute exam. 5 Results of tests are analyses and compared statistically In order to further establish effects of verbal progression on 'chunking' into STM, another follow stud could have various sets of pause between each word and a lot more conditions, for example Conditions A/B/C/D/E/F/G/H/I/J which would have different ascending lengths of pauses between each word from 0-->10 respectively. This would then allow further statistical analysis, and in depth statistical interpretation of the results. It would also allow the interpretation of various correlations at various time intervals between the two variables of 'length of pause between each word' and the 'recall score of participants'. Follow up research in this are would be very effective and useful in helping to refine retrieval methods, in particular for exam revision. Conclusion The Null hypothesis, which stated that, "Any difference in the recall scores will be purely by chance and not affected by the speed of verbal progression through the word list", was rejected. Thus, in turn the Alternate hypothesis that "the faster the reader verbally progresses through the wordlist, the greater the participants 'chunking' and recall from STM's limited capacity if 7+/-2 chunks." was supported. ...read more.