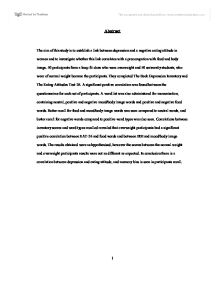 The aim of this study is to establish a link between depression and a negative eating attitude in women and to investigate whether this link correlates with a preoccupation with food and body image.

Abstract The aim of this study is to establish a link between depression and a negative eating attitude in women and to investigate whether this link correlates with a preoccupation with food and body image. 50 participants from a keep fit class who were overweight and 50 university students, who were of normal weight became the participants. They completed The Beck Depression Inventory and The Eating Attitudes Test-26. A significant positive correlation was found between the questionnaires for each set of participants. A word list was also administered for memorisation, containing neutral, positive and negative mood/body image words and positive and negative food words. Better recall for food and mood/body image words was seen compared to neutral words, and better recall for negative words compared to positive word types was also seen. Correlations between inventory scores and word types recalled revealed that overweight participants had a significant positive correlation between EAT-26 and food words and between BDI and mood/body image words. The results obtained were as hypothesised, however the scores between the normal weight and overweight participants results were not as different as expected. In conclusion there is a correlation between depression and eating attitude, and memory bias is seen in participants recall. Introduction Depression is one of the most common psychological problems, affecting nearly everyone through either personal experience or through depression in a family member. The cost in human suffering cannot be estimated. Depression can interfere with normal functioning and frequently causes problems with work, social and family adjustment. It causes pain and suffering not only to those who have a disorder, but also to those who care about them. Serious depression can destroy family life as well as the life of the depressed person. The impact of depression is clearly palpable in the work place where productivity and absenteeism are commonplace; this will also in turn have a negative impact on the economy. ...read more.

Procedure The experimental group was tested together at the beginning of the keep fit class. The rest of the participants were chosen using oaccedental sampling on the University campus and were tested in a quiet room in groups of five. Each participant needed to read and sign a consent form to participate, so they were aware of what the study was about and what was expected from them before they took part. The participants were guaranteed anonymity and were known only by number so they felt more comfortable about disclosing any information. Each participant was measured and weighed at this point as the EAT-26 questionnaire would require them to insert these details so their BMI could be calculated. They were weighed and measured in privacy, so no one had access to another participant's information. They were then given the list of words for two minutes in which time they were asked to commit as many as they could to memory. After two minutes the list was taken away and the participants were asked to write down as many of the words as they could remember. They were given a further three minutes to do this and then asked to stop writing. The participants were then given the two inventories, which they were asked to complete carefully and in silence. The inventories and word list had simple standardised instructions, informing participants how they should be completed. When they had completed all the tasks they were thanked for their help and then debriefed. The participants were then asked if they had had any difficulties completing the tasks and any questions they had were answered. Once the data was collected, appropriate measures were taken to eliminate any participants from the study who do not fit the criteria outlined for either the experimental group or the control group. The EAT-26 has a preliminary question asking the participants whether they think they are overweight themselves. ...read more.