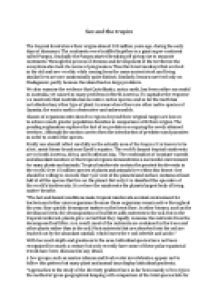 The combination of constant warmth and abundant moisture of the tropical regions demonstrates a successful environment for many plants and animals.

﻿Sex and the tropics The tropical forests have their origins almost 200 million years ago, during the early days of dinosaurs. The continents were huddled together in a giant super-continent called Pangea. Gradually the Pangea started breaking off giving rise to separate continents. Through the process of division and development of the territories the ecosystem also took its course of progression. Thus the forest monkeys that evolved in the old and new worlds, while coming from the same ancient stock and living similar lives are now anatomically quite distinct. Similarly, lemurs survived only on Madagascar, partly because the island had no large predators. We also examine the evidence that Cactoblastis, cactus moth, has been rather successful in Australia, yet caused so many problems in North America. To capitalise the response we must note that Australia has no native cactus species, and so far the moth has not attacked any other type of plant. In areas where there are other native species of Opuntia, the exotic moth is destructive and unfavourable. Classes of organisms introduced to regions beyond their original ranges are known to achieve much greater population densities in comparison with their origins. The pending explanation explores the fact of no predators occupying the newly attained territory. Although the motion carries then the introduction of predators and parasites in order to control the species. ...read more.

the diversity of a taxon through many different habitats * Despite and barrier of insufficient ecological data or perhaps because of it, the notions as to the explanations for the ecological co-existence have produces six hypothesise: The time theory The common position if that all communities tend to diversify in time. Moreover the scientists claim general increase in the environment complexity as one proceeds towards the tropics which once again alights the importance and value of the tropical regions. The theory of spatial heterogeneity The more heterogenous the physical environment becomes, the more complex and diverse the plant and animal communities supported by the environment The high variability of sexually-reproduced plants and animals allows species to adapt to changing environmental conditions. Plants can reproduce either sexually (through spores or seeds) or asexually (vegetatively). There is a geographic pattern to plant reproduction: in the temperate zones of the world, cold winters make it difficult for plants to reproduce vegetatively, while in the tropics vegetative reproduction is an option for both wild and cultivated plants. Many tropical cultivars, especially the traditional Hawaiian crops are propagated vegetatively. Competition hypothesis Natural selection takes a greater course when the restriction to food types and habitat requirements are present and one can observe increased importance of competitive interaction. ...read more.

This denizen of the flooded forests on the Rio Negro, was like the great whale, hunted almost to extinction in the mid 20th century to provide oil boiled down from its blubber. Curare is one of the most potent and famous jungle poisons. The French scientist Charles Marie de la Condamine first spotted it in the use among Amazon Indians in the mid 18th century. Soon after it was discovered that it is in fact a mixture of chemicals prepared from the deadly bark of several trees, with snake venom and poisonous ants sometimes added for extra potency. Curare causes death by paralysing muscles until the animal stops breathing The clove and nutmeg tree were found on the slopes of volcanoes and gave the name to the area-spice islands It is one of the dogmas of the day that world would had a great amount of gain from protecting the rainforest. For some the tropics are a biochemical laboratory of the stupendous potential. While today?s laboratories can synthesize new molecules at a pace unimaginable a few decades ago, nature provides the optimum starting points. The secrets of rainforests species offer a vast pharmacy of potentially extremely valuable chemicals. For the sake of the species richness, diversity and evolution we must preserve biodiversity by protecting habitats from exploitation or degradation for there is much more yet to be discovered. ...read more.