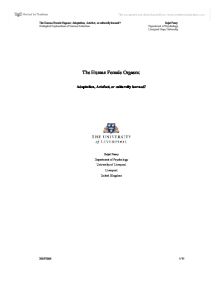 The Human Female Orgasm: Adaptation, Artefact, or culturally learned? Rajat Passy Department of Psychology University of Liverpool Liverpool United Kingdom The Human Female Orgasm: Adaptation, Artefact, or culturally learned? Word Count: 2958 (excluding in-text and end-text referencing and quotations) The female orgasm has been a source of fascination for a variety of groups from sex researchers to the lay public, and evolutionary psychologists are no exception. Evolutionists have not had much difficulty explaining the male orgasm, due to its direct relationship with reproduction. But the Darwinian rationale behind the female orgasm has remained elusive. Women are able to have sexual intercourse and even conceive a child - doing their part for the perpetuation of the species - without experiencing orgasm (Smith NY times, 2005). Unlike the unicorn, (which is specially interesting precisely because it does not exist) or extrasensory perception (which probably does not exist but is interesting because of the possibility that it might) or the above mentioned male orgasm (which exists with monotonous regularity and for the most part is interesting only to people directly involved in one) the female orgasm definitely exists and yet arouses interest, debate, ideology, technical manuals and popular literature simply because it is so often absent (Symons, 1979). There have been numerous evolutionary accounts put forward by researchers in the last 70 years attempting to explain the female orgasm but very few have gained academic credence. The first section of this paper will consider two prevailing evolutionary arguments for its existence i.e. the pair-bond account (Morris, 1967) and the intermittent reinforcement theory (Diamond, 1980 and Hrdy, 1979) and argue that they suffer from one or more debilitating flaws either in the way they interpret evidence or how their argument is constructed. While evaluating the above accounts, it will also reveal two main biases which have adversely affected the evolutionary explanations of the female orgasm. One of the biases is assuming that the female orgasm evolved to its current condition because it somehow facilitated the reproductive success of its possessor (Lloyd, 2005). ...read more.

Evident from the sexology literature both of these variations are widespread but in order for the reinforcement theory to function; it is only the first interpretation that can be considered. Simply speaking, this hypothesis must concentrate on those females who sometimes do and sometimes do not have orgasm during intercourse (Lloyd, 2005). However, according to Kinsey et al. (1953), such women only make up 36% to 44% of the population. Thus, it seems that although the hypothesis may be applied to a sizable percentage of women (and the intermittent reinforcement mechanism may be applied to them) it does not apply to the majority of women therefore may not be the best way to explain orgasm in general. Having evaluated the above accounts and drawn out their various discrepancies, it is important to present a non-adaptive account which was originally put forward by Donald Symons (1979). Instead of acknowledging the female orgasm as an adaptation, Symons quoted that "human female orgasm is best regarded as a potential" (1979, p.89). He holds that the female orgasm is a capacity among all mammals but is activated in only a few of the species. This section will explicate and defend Symons's hypothesis. According to his theory, the female orgasm is a by-product of embryological development. In the early stages of human embryo development, both male and female share the same physical characteristics, the exception being different chromosomes - they are not dissimilar by any other sexual characteristics. This stage continues until the male embryo has hormones released into its body after which the embryo starts to develop different sexual features from the basic female form (Symons, 1979). For the first 8 weeks of gestation, the male and female embryos are indistinguishable except at the level of chromosomes (Hamburg 1978a). It is important to note that the penis and clitoris are the "same" organ in men and women; there is an organ in the under developed embryo that turns into a penis if it receives a dose of particular hormones; otherwise it matures into a clitoris. ...read more.

Despite the popular belief of men achieving orgasm more consistently than women, only 75% of men reported to always achieving orgasm whereas 29% of women reported the same (Laumann et al., 1994). Higher orgasm rates have generally been observed with older age and higher educational standing. Black compared to white and Hispanic samples and religious conservative samples compared to those without religious affiliations reported lower rates. Sexual attitudes and traditions associated with social-desirability effects may partly explain findings, i.e. those who report higher orgasm rates may generally have more liberal views of sexuality and sexual behaviour (Mah and Binik, 2001). Despite the above studies, psychologically based research thus far has been relatively unsystematic especially compared to the extensive research done from a biological perspective. This paper claims to have addressed the following: first, that there are serious debilitating evidential flaws with all but one of the available evolutionary explanations for female orgasm; second, that certain presumptions, especially adaptationism (belief that every human trait has an adaptive function) and androcentrism (for the purpose of this essay: belief that male sexuality is like female sexuality) are at the centre of the scientific failures incurred so far; and third, that the various psychological and sociocultural explanations that have been put forward, despite their under researched models, provide logical arguments for the existence and variance of the female orgasm. In conclusion, there are numerous research questions still open for exploration. One field of research includes pursuing a proposition of the by-product view (Symons, 1967) where cross-species comparisons could be carried out to determine whether those species have highly sexual males also have females who are capable of having orgasm. Also, as suggested by Lloyd (2005) cross species studies of the female anatomy to determine the placement of the clitoris, would help elucidate the question of whether direct clitoral stimulation is experienced by any of our close relatives (a line of research closely supported by Hrdy). The evolutionary, psychological and cultural explanations of the female orgasm still requires years of scientific research and a model encompassing the various explanations could prove useful in many ways. ...read more.