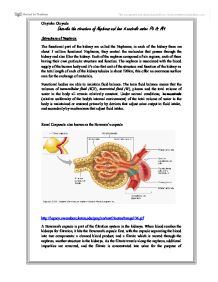 .Structure of Nephron The functional part of the kidney are called the Nephrons, in each of the kidney there are about 1 million functional Nephrons, they control the molecules that passes through the kidney and also filter the kidney. Each of the nephron composed of six regions, each of them having their own particular structure and function. The nephron is associated with the blood supply of the human body and it's also that unit of the structure and function of the kidney as the total length of each of the kidney tubules is about 120km, this offer an enormous surface area for the exchange of materials. Functional bodies are able to maintain fluid balance. The term fluid balance means that the volumes of intracellular fluid (ICF), interstitial fluid (IF), plasma and the total volume of water in the body all remain relatively constant. Under normal conditions, homeostasis (relative uniformity of the body's internal environment) of the total volume of water in the body is maintained or restored primarily by devices that adjust urine output to fluid intake, and secondarily by mechanisms that adjust fluid intake. Renal Corpuscle also known as the Bowman's capsule http://legacy.owensboro.kctcs.edu/gcaplan/anat2/notes/Image136.gif A Bowman's capsule is part of the filtration system in the kidneys. When blood reaches the kidneys for filtration, it hits the Bowman's capsule first, with the capsule separating the blood into two components: a cleaned blood product, and a filtrate which is moved through the nephron, another structure in the kidneys. ...read more.

The glomerular filtrate consists primarily of water, excess salts (primarily Na+ and K+), glucose, and a waste product of the body called urea. Urea is formed in the body to eliminate the very toxic ammonia products that are formed in the liver from amino acids. Since humans cannot excrete ammonia, it is converted to the less dangerous urea and then filtered out of the blood. Proximal convoluted tubule The Proximal convoluted tubule Tissues and cells connected with the structures that bonds the renal pelvis to the glomeruli; the convoluted section of the vertebrate nephron that is in between the Bowman's capsule and the loop of Henle, is made up of a single layer of cuboidal cells with striated borders- and its main function is in the resorption of sugar, sodium and chloride ions, and water from the glomerular filtrate, this stage is known as the tubular reaborption. Reaborption of water The Reaborption that takes place happens in a two-step process beginning with the active or passive extraction of substances from the tubule fluid into the renal interstitium (the connective tissue that surrounds the Nephron), and then the transport of these substances from the interstitium into the bloodstream. This is the stage when the kidney get a transmit from the Osmoreceptors in the hypothalamus. When there is an increase in blood osmotic potential (rises), decrease ADH (anti-diuretic hormone)output from the posterior lobe of the pituitary gland-permeability of distal collecting duct decreases, less water reabsorbed copious dilute urine is produced. ...read more.

Filtrate passing down through the descending of the loop of Henle is flowing in the contrary direction to the fluid in the ascending limb. The fluid is increasing concentrated as it moves down and dilute as it moves up. This is known as counter-current flow (counter-current multiplier) allows concentrated urine to be produced. This is important because more water is drawn out of the tube (this is when the water is at the collecting duct), when it passes through the medulla again, this is when concentrate urine is produce; moreover, any filtrate not reabsorbed (this is most of the urea) some water and salt are drained into the bladder. Distal convoluted tubule The convoluted section of the vertebrate nephron that is in between the loop of Henle and the non-secretory part of the nephron, and that is based with the concentration of urine that is made through the urea. Collecting duct The collecting ducts Reabsorbs Na+ ions through coupled secretion of H+ or K+ ions into the tubular fluid, a process which requires the presence of the adrenal hormone aldosterone. By acidifying the urine the distal convoluted tubule plays an important role in acid-base balance normally is relatively impermeable to water. However in the presence of anti-diuretic hormone (ADH) its permeability to water increases permitting concentration of the urine. Each of the structure of the nephron has their duty in the participation of how it works and they are vital to the human body system. http://www.wisegeek.com/what-is-the-loop-of-henle.htm http://faculty.stcc.edu/AandP/AP/AP2pages/Units24to26/urinary/loopHen.htm http://www.google.co.uk/imgres?imgurl=http://ex-anatomy.org/image/4.gif&imgrefurl=http://ex-anatomy.org/closer.html&usg=__rZ64Sj7GqD-pG1yHuGrgeEbyTVg=&h=290&w=300&sz=50&hl=en&start=5&itbs=1&tbnid=aLKE8DP9V6iJFM:&tbnh=112&tbnw=116&prev=/images%3Fq%3Dloop%2Bof%2Bhenle%26hl%3Den%26gbv%3D2%26tbs%3Disch:1 http://www.google.co.uk/search?hl=en&source=hp&q=Distal+convoluted+tubule&btnG=Google+Search&aq=f&aqi=&aql=&oq=&gs_rfai= http://www.wisegeek.com/what-is-bowmans-capsule.htm ?? ?? ?? ?? Olayinka Oloyede Describe the structure of Nephrons and how it controls water P5 & M4 ...read more.