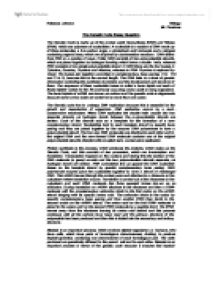 The Genetic Code Essay Question The Genetic Code is made up of the nucleic acids Deoxyribose (DNA) and Ribose (RNA), which are polymers of nucleotides. A nucleotide is a section of DNA made up of three molecules, a five-carbon sugar, a phosphoric acid molecule and a nitrogen containing organic base, which are all joined by condensation reactions. DNA differs from RNA in a number of ways. Firstly DNA consists of two polynucleotide strands, which are joined together by hydrogen bonding which forms a double helix, whereas RNA consists of one single polynucleotide strand. In DNA there are the four bases in Cytosine, Guanine, Thymine and Adenine, whereas in RNA Thymine is replaced by Uracil. The bases join together according to complementary base pairing, A to T/U and C to G, because this is the correct length. The DNA helix is a store of genetic information controlling the synthesis of proteins and the development and structure of them. The sequence of three nucleotide bases is called a base triplet and each of these triplets' codes for the 20 commonly occurring amino acids in living organisms. The base triplets of mRNA are known as codons and the genetic code is degenerate because some amino acids are coded for by more than one codon. ...read more.

The Genetic Code contains DNA, which is a very stable molecule. However sometimes mutations can occur, which is when there are changes in the sequence of nucleotide bases in DNA which results in the formation of a different polypeptide and an altered base sequence which codes for a different sequence of amino acids. There are a number of ways in which the base sequence of the bases in DNA can be altered. These are Substitution (the replacement of one or more bases by one or more different base, often resulting in a non-functional protein being produced) Deletion, (the removal of one or more bases) and Addition (the addition of one or more bases). Addition and Deletion both result in a frame shift, which is the alteration in the codons from the point of deletion/addition and then results in a different protein being produced which is often non-functional. This is one type of genetic variation, but there are others, such as, producing new alleles of genes, during meiosis which produces new combinations of maternal and paternal origin alleles on homologous chromosomes through crossing over at chiasmata, through independent assortment which produces new combinations of maternal and paternal origin alleles on homologous chromosomes and their alleles, by producing variation in gametes in s****l reproduction and random fusion of gametes at fertilisation which brings about new combinations of alleles. ...read more.

The Genetic code has been used for many applications in gene technology. Genetic engineering is a technique, which allows genes to be removed from the DNA of one organism and then inserted into the DNA of another species. This is a useful technique because genes can be injected into humans to cure genetically inherited diseases such as cystic fibrosis, which is caused by a defective gene. Plants and animals have been cloned by vegetative propagation and the splitting of embryo's to produce better crop yield or meats, which are more profitable. However ethical issues have been raised about the use of genetic engineering. In conclusion it can be seen that the Genetic Code is fundamental for all living organisms. The processes such as protein synthesis and DNA replication that occur in terms of the Genetic Code are vital for the growth and reproduction of organisms. Mutations can occur which alter DNA sequences and produce genetic variation. This variation is related to Natural Selection and Evolution, which are changes in the frequency of alleles in a species. The main use of the Genetic Code is its applications in gene technology, such as genetic engineering which replaces defective genes to cure genetically inherited diseases. These ideas are continuing to be researched, even though a number of ethical issues have been raised. ?? ?? ?? ?? Rebecca Johnson Biology Mr. Donohue ...read more.