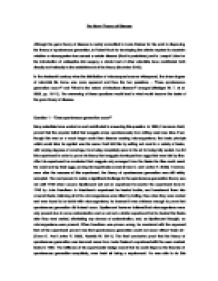 The Germ Theory of Disease. In the nineteenth century when the distribution of microscopes became widespread, the sheer degree of microbial life forms was more apparent and thus the two questions Does spontaneous generation occur? a

The Germ Theory of Disease Although the germ theory of disease is mainly accredited to Louis Pasteur for his work in disproving the theory of spontaneous generation, to Robert Koch for developing the criteria required to ascertain whether a microorganism has caused a certain disease (Koch's postulates), and to Joseph Lister for the introduction of antiseptics into surgery, a whole host of other scientists have contributed both directly and indirectly to the establishment of the theory (Snowden 2010). In the nineteenth century when the distribution of microscopes became widespread, the sheer degree of microbial life forms was more apparent and thus the two questions - "Does spontaneous generation occur?" and "What is the nature of infectious disease?" emerged (Madigan M. T. et al. 2009. pp. 10-11). The answering of these questions would lead to what would become the basis of the germ theory of disease. Question 1 - "Does spontaneous generation occur?" Many scientists have worked on and contributed to answering this question. In 1668, Francesco Redi, proved that the popular belief that maggots arose spontaneously from rotting meat was false. Even though this was on a much larger scale than disease causing microorganisms, the basic principle which would later be applied was the same. ...read more.

(Madigan M. T. et al. 2009. p.13). Question 2 - What is the nature of infectious Disease? As early as 1546, before the development of the first microscope, Girolamo Fracastoro suggested that invisible organisms caused disease, and after the discovery of the existence of microorganisms, this theory was widely accepted, however, there was no concrete evidence for this theory until much later. Edward Jenner, often referred to as the father of immunology, unknowingly used this theory to develop a vaccine for smallpox, he noticed that milkmaids did get infected with cowpox but never caught smallpox, and hypothesised that once someone was infected with cowpox, they were immune to smallpox. To test his theory he inserted pus taken from an infected milkmaid into the cut on a boy, after being exposed to smallpox several days later, the boy did not develop the disease - he was immune. (sciencemuseum.org.uk). This experiment proved that there was a similar causative agent for these diseases, and that once a person was exposed to a disease causing microorganism they are likely to develop a resistance to that disease. In 1847, Ignaz Semmelweis observed during his post in a teaching hospital in Vienna that women who had their deliveries done by midwives had a much lower rate of post delivery mortality that those done by physicians and medical students. ...read more.