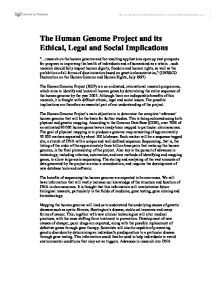 The Human Genome Project and its Ethical, Legal and Social Implications

The Human Genome Project and its Ethical, Legal and Social Implications "...research on the human genome and the resulting applications open up vast prospects for progress in improving the health of individuals and of humankind as a whole...such research should fully respect human dignity, freedom and human rights, as well as the prohibition of all forms of discrimination based on genetic characteristics," (UNESCO Declaration on the Human Genome and Human Rights, July 1997) The Human Genome Project (HGP) is a co-ordinated, international research programme, which aims to identify and locate all human genes by determining the entire sequence of the human genome by the year 2005. Although there are indisputable benefits of this research, it is fraught with difficult ethical, legal and social issues. The possible implications are therefore an essential part of our understanding of the project. The Human Genome Project�s main objective is to determine the complete 'reference� human genome that will be the basis for further studies. This is being achieved using both physical and genetic mapping. According to the Genome Data Base (GDB), over 7000 of an estimated 80 000 human genes have already been mapped to particular chromosomes. ...read more.

But this is problematic since information cannot always be kept confidential. Who should have access to genetic information? If information is managed carelessly, it could lead to discrimination by employers, insurers, courts, schools, police and many other institutions. A US case was reported in Newsweek in December 1997 where information that a child had the genetic condition known as fragile X syndrome was passed on to his health insurance company. Insurance was cancelled for him and his siblings, despite the fact that his siblings had not been diagnosed with the condition and the fact that there is no available treatment for fragile X. Accuracy of information is also an issue here, what controls and checks should be in place to ensure that information held on databases is correct? Genetic testing is a minefield of ethical issues since it has a wide variety of applications including carrier screening, prenatal diagnostic screening, presymptomatic testing for assessing risk of adult-onset diseases such as Alzheimer�s disease, conformational diagnosis of a symptomatic individual and forensic testing. For an individual, knowledge of a defective gene will have possible benefits including preventative treatment, lifestyle changes to delay or reduce symptoms, or, if treatment is not available, the chance to plan the individuals life and prepare for the onset of disease or the deterioration of health. ...read more.

However, this kind of treatment could have unpredictable effects that would change the lives of all subsequent generations. Since the individuals are unborn, their consent cannot be obtained. Theoretically, it would be possible to take control of our own evolution and create 'superhumans�. According to some scientists, genetic enhancement is an irresistible reality that is only twenty years away. However, there is a risk of unforeseen, unpredictable problems, both scientifically and socially. The results of the Human Genome Project will affect us all, either directly or indirectly. One of the main threats is that it has the potential to provide us with consequences that have not yet been considered. Without time to think about what is ethically sound, this may lead to considerable difficulties. It is generally held that advances that will prevent human suffering are worthwhile, whereas those that will not are questionable. It can be argued that the advancement of our knowledge concerning the human genome is progressing faster than our ability to regulate its impact. It is clear that widespread education is needed, so that people can formulate and voice opinions on what is ethically and socially acceptable, and so that policy and legislation may be brought into place to govern practices that concern the human genome. ...read more.