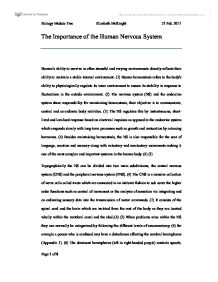 The Importance of the Human Nervous System. The NS is possibly one of the most important systems in the evolution of multi-cellular organisms allowing cells, tissues, organs and even organisms to communicate and regulate both their internal and external e

The Importance of the Human Nervous System

Human’s ability to survive in often stressful and varying environments directly reflects their ability to maintain a stable internal environment. (1) Human homeostasis refers to the body's ability to physiologically regulate its inner environment to ensure its stability in response to fluctuations in the outside environment. (2) The nervous system (NS) and the endocrine system share responsibility for maintaining homeostasis, their objective is to communicate, control and co-ordinate body activities. (3) The NS regulates this by instantaneous, short-lived and localised response based on electrical impulses as apposed to the endocrine system which responds slowly with long-term processes such as growth and maturation by releasing hormones. (4) Besides maintaining homeostasis, the NS is also responsible for the seat of language, emotion and memory along with voluntary and involuntary movements making it one of the most complex and important systems in the human body. (4) (1)

Topographically the NS can be divided into two main subdivisions, the central nervous system (CNS) and the peripheral nervous system (PNS). (4) The CNS is a massive collection of nerve cells called tracts which are connected in an intricate fashion to sub-serve the higher order functions such as control of movement or the analysis of sensation via integrating and co-ordinating sensory data into the transmission of motor commands. (1) It consists of the spinal cord and the brain which are isolated from the rest of the body as they are located wholly within the vertebral canal and the skull.(4) (3) When problems arise within the NS they can normally be categorized by following the different levels of neuroanatomy, (6) for example a person who is confused may have a disturbance affecting the cerebral hemispheres (Appendix 1). (6) The dominant hemispheres (left in right-handed people) controls speech, the non-dominant hemisphere provides spatial awareness. Appendix 2 shows the different lobes and their functions. (6)

The PNS consists of cells that connect the CNS with the other tissues in the body. (5) These cells are aggregated into a large cable like structures called nerves, which are threaded like wires throughout the body. (4) Components include the cranial nerves, spinal nerves, ganglia and sensory receptors. (2)

Sensory information (touch/pain, vision, taste, smell) (2) is detected outside the nervous system by receptors (mechanoreceptors detect touch, photoreceptors detect light, chemoreceptors are involved in detecting chemical stimuli in the environment including taste /smell but also CO2 in the blood stream) (2) which monitor external/internal environments. Information is transmitted by the afferent division of the PNS via sensory neurons through to the dorsal-root-ganglion and enters the spinal cord through the dorsal/posterior root. (5) Some neurons synapse with other interneurons in the dorsal horn, while others continue up to the brain where the information is processed. (5) The CNS then sends motor commands by means of the efferent division of the PNS via cell bodies in the ventral/anterior horn through the ventral root via motor neurons to muscles or glands called effectors. (3)

The efferent division of the PNS is subdivided into the somatic nervous system which provides control over skeletal muscle contractions and the autonomic nervous system (ANS) (1) which provides automatic involuntary regulation of smooth muscle, glandular secretions and cardiac muscle. (3) The ANS includes a sympathetic division which stimulates tissue metabolism, for example it accelerates the heart rate or increases alertness in response to adrenaline. (2) The parasympathetic division conserves energy and regulates resting activities either through stimulation or inhibition such as the regulation of digestive secretions, smooth muscle contraction in the gut and the reduction of heart rate and cardiac contractions. (5) These systems give evidence that emotion is biologically based as intense emotion like fear or anger attribute responses via the sympathetic-division by gearing up the body for energy output. (7)

The tissue of the NS comprises two basic cell types; nerve cells/neurons and supporting cells called neuroglia. (1) The neuroglia cells regulate the environment around the neurons by providing a supporting framework for neural tissue and acting as phagocytes by removing dead cells or protecting from harmful particles. (1) These cells are very small but far outnumber neurons and have the ability to divide. (2) Neurons are specialised for the conduction of electrical impulses from one region of the body to another and their size and shape vary considerably. (8) In spite of the variations neuron structures have some common features; each has a predominant swelling called the cell body or soma which contains the nucleus and other relevant organelles, (8) most adult neurons lack centrioles thus lack ability to divide after embryonic development preventing the replacement of damaged or diseased neurons (3) (studies have found however that brain cells called neuroblasts, (11) are able to differentiate after embryonic development, just not at any rapid rate showing an efficient repair mechanism). (9) Arising from the soma are processes or small branches called dendrites which form the receptive regions of the neuron, and a longer process called an axon which conducts nerve impulses away from the cell body. (1) (8) In some cases the axons divide forming a number of collaterals so that impulses from one neuron can reach several different destinations. (3) The ends of the axon and its collaterals subdivide to form numerous smaller branches, each of which terminates in synaptic endings allowing communication between neurons in the pathway. (5)

Neurons can be classified according to the number of processes that extend from the soma. (8) Multipolar neurons have several dendrites and one axon extending from the cell body. (Appendix 3) Bipolar neurons have two processes, an axon and a single dendrite, this type of neuron can be found in the retina. (8) (Appendix 4) Unipolar neurons are generally sensory neurons that have a single process, which then divides into two.(3) (8) (Appendix 5) One of the two processes extends outward to receive sensory information from various areas of the body, while the other process relays sensory information towards the spinal cord or brain. (8)

A neurons most important feature is that it is electrically excitability due to the charge difference across their membranes or transmembrane potential. (1) This membrane potential arises from different concentrations of charged ions between interstitial and intracellular fluid and the selective permeability of the membrane. (2) This flow of ions constitutes an electrical current. (1) Undisturbed cells have a membrane potential at a measurement of -70 mill-volts (mV) known as its resting potential; this is due to a high composition of anions, mainly phosphates (PO43-) and proteins, along with potassium ions (K+) in the cytosol and a high number of cations, mainly sodium ions (Na+) in the extracellular fluid. (3) Also the membrane is fifty times more permeable to K+ than Na+ via ion channels; this adds a residual negative charge inside the neuron. As a result of the radical differences in concentration there is a strong tendency for ions to diffuse through membrane channels down the electrochemical gradients, but these gradients are maintained by the action of the sodium/potassium pump, (4) which actively transports Na out of the cell and K into the cell, and the selective opening and closing of ion channels. (5)

A nerve impulse (action potential) will not initiate unless the membrane depolarises sufficiently to a level known as the threshold-(-60mV). Every stimulus that brings the membrane to threshold generates an identical action potential, called an all-or-nothing response. (2) This causes rapid depolarisation by activating voltage-regulated Na channels allowing Na+ to flood in by diffusion, thus bringing the membrane voltage to around 30mV. Following this K-channels open and Na channels close, K+ diffuses out along the gradient and repolarisation occurs. (5) A slight overshoot hyperpolarises the membrane due to K channels relatively slow gates closing. Resting potential is restored by Na/K-pump. (4) Following the passage of an action potential, there is a brief delay, the refractory period during which the membrane cannot be stimulated, thus preventing the message from being transmitted backward along the membrane. (2) The propagation of nerve impulses along the axon membrane is caused by the attraction of opposite charges inside the cell membrane. (1) Positive ions begin spreading drawn to the surrounding negative charges, depolarising adjacent portions of the membrane and activating action potentials.(4) These local currents move forward along the axon only and not backwards because the previous segment is still in refractory period. (5)

Many neurons have the ability to conduct electrical impulses very quickly. This can be attributed to the presence of the lipid abundant mylelin sheath surrounding the axon. (2) This sheath is formed by specialized Schwann cells. (5) (Appendix 6) During development the Schwann cell rotates around the axon forming a ‘swiss roll’ structure consisting of overlapping layers of cell membranes. (5) It functions as an efficient electrical insulator preventing the continuous propagation of action potentials. (3) The myelin sheath is not continuous, but interrupted by nodes of Ranvier where the axon is uncovered. (3) It is here where action potentials are generated where they jump from one node to the next, a phenomenon called salutatory conduction. (4) Multiple sclerosis is a disease whereby the body’s own immune system attacks the myelin sheaths, (10) leading to demyelination and scarring particularly in the white matter of the brain and spinal cord. (6)The mechanisms involved in this disease are understood but the cause remains unknown. (6)

The arrival of an action potential at the end of an axon results in the transfer of information to another neuron or effector cell via synapses. (3) The information transfer occurs through the release of chemicals called neurotransmitters from the synaptic terminal, (3) acetylcholine is the transmitter at neuromuscular junctions connecting motor-nerves to muscles. (5)  There is a small synaptic cleft between the transmitting presynaptic cell and the receiving postsynaptic cell thus there is no contact between the two. (5) Arrival of an impulse depolarises the presynaptic membrane thus increasing permeability to calcium ions (Ca+). The increase in Ca causes vesicles containing neurotransmitters to fuse with presynaptic membrane and discharging their contents into the cleft. (1) Neurotransmitter diffuses across and binds to receptor sites on the postsynaptic membrane. (3) (Appendix 7) This leads to the opening of ion channels causing depolarisation (excitatory synapse) or hyperpolarisation (inhibitory synapse). (1) Dopamine, active in the brain, (6) has a number of important roles in functions including, cognition, motivation and forming new behaviours; dysfunction of the dopamine system is implicated in Parkinson's disease, a progressive degenerative disorder of the CNS (6) and Schizophrenia, a mental disorder with delusions and disintegration of thought processes. (12)

The NS is possibly one of the most important systems in the evolution of multi-cellular organisms allowing cells, tissues, organs and even organisms to communicate and regulate both their internal and external environment. (7) To human beings it is the master controller of the body due to its ability to constantly oversee and control environmental issues within the body as well as provide the necessary information which allows for response to external factors.  The understanding of its structure and function has allowed for great breakthroughs in both medicine, with stem cell technology for the repair of circuits damaged by traumatic injury or degenerative disease (13) and psychology via deeper understanding of the brain, its development and neural pathways. Technological advancements have proven to aid breakthroughs with electro-encephalogram (EEG) recordings allowing the visualization of electrical activity. (7) However due to its vast complexity, particularly that of the brain there are still many more breakthroughs needed to fully comprehend its mechanics and allow us to unlock its full potential.