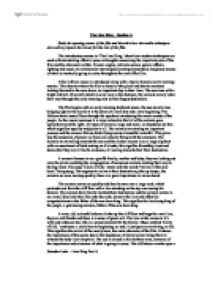 The Lion King - Study the opening scenes of the film and describe how the media techniques are used to prepare the viewer for the rest of the film.

The Lion King - Section A Study the opening scenes of the film and describe how the media techniques are used to prepare the viewer for the rest of the film. The introductory scenes in 'The Lion King,' show how modern techniques are used with devastating effect to pass on thoughts concerning the important parts of the film and the characters within. Camera angles, intricate scenes, special effects, lighting and music are articulately intermingled creating tremendous imaginary scenes of what is eventually going to occur throughout the rest of the film. Tribal African music is introduced along with a typical Kenyan early morning sunrise. This denotes where the film is about to take place and shows creatures looking forward to the new dawn, an important day in their lives. The sun rises with a bright red ball of warmth which is some way in the distance, the animals slowly make their way through the early morning mist to their happy destination. ...read more.

The animals have finally reached their destination and the camera zooms in on a small blue bird who flies onto the rock, bows to the lion and offers his congratulations to the father of the new born king. This signifies the lion being king of the jungle, a god among animals, father of the new born king. A wise, old, colourful baboon climbs up the cliff face and hugs the male lion, they are old friends and there is a sense of good-will. The lion walks across to it's wife and embraces her, this is a proud moment for the family. Music entitled 'Circle of Life,' continues, a circle has no beginning, no end, it just goes on revolving, as life. This signifies the arrival of the newly born, the main character of the film. It shows the importance of this scene due to the abundance of every animal being there to witness the baby lion's baptism. ...read more.

The introductory scenery combined with scintillating camera production stirs up the imagination of the viewer producing an air of anticipation for the rest of the film. Emotions are stirred up because of the close relationship of the cartoon creatures and other respects of life and religion. It shows respect from the animals to their King and also brings together family mannerisms and relationships. Due to the preparation and introduction the viewer would be sat on the edge of their seat waiting in anticipation of what is to come. This short introduction relays to the public the importance throughout the animal kingdom of having a leader. It signifies the arrival of the newly born cub who is eventually going to take over the responsibility of king from his father. By introducing this scene so early it prepares the viewers with a glimpse of the future kings birth and the whole importance of this ceremony to the animal kingdom. By Brendan Luke Brendan Luke - Lion King Part A ...read more.