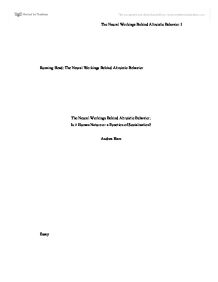 The Neural Workings Behind Altruistic Behavior: Is it Human Nature or a Function of Socialization?

Running Head: The Neural Workings Behind Altruistic Behavior The Neural Workings Behind Altruistic Behavior: Is it Human Nature or a Function of Socialization? Andrea Ham Essay Studying the origin of altruism has proven to be immensely complex and controversial as there are numerous competing theories striving to form an explanation for the reasons why people choose to help others despite the lack of personal benefit that would result from such a cooperative interaction. The following pages demonstrate the spectrum of reasoning to which theorists have attributed altruistic behaviors. The debate on altruism resonates on the question of whether helping behavior occurs due to its inherent role in human nature or as a result of attempts made to satisfy motives in a socialized community which preach of the righteousness behind cooperating with and helping others. From an evolutionary standpoint, altruism reaps its benefits through mechanisms of group selection, kin selection, and reciprocal altruism. Evolutionary theory, however, does not account for the altruistic interactions which take place between unrelated and estranged individuals who are unlikely to cross paths in the future. In confronting this scenario are explanations that stem from theories of a human inclination towards empathy and the neural bases that provide psychological pleasure in response to altruistic behaviors as a result of the activation that occurs in reward-processing circuits. If altruistic acts have the power to activate regions of the brain that typically respond to pleasurable stimuli such as food, s*x and money, it could be said that human beings are predisposed to cooperate and behave altruistically. The proposed study takes this notion even further to discover whether or not these activations can be used as reliable predictors of a person's tendency to commit altruistic acts. Based on the results, which would display the level of activation in reward-processing regions during the fMRI analyses, one could ascertain if an individual receives greater psychological rewards from self-serving stimuli such as personal payment or altruistic stimuli such as charitable giving. ...read more.

In addition, by determining the neurological connections to prosocial behaviors, scientists can discover methods which could help trigger similar reactions and motivate such behaviors in people suffering from social disorders such as autism. Also, scientists could also find ways in which to better help sufferers of depression or drug addicts by providing them with mechanisms which could heighten their emotional states on a neurological level and also contribute to the public good as they would be participating in altruistic events. By discovering the reasons why people choose to engage in helping behaviors, we can finds ways in which to promote a greater degree of such actions which would not only benefit the individual altruist who receives psychological rewards for his actions but also helps the recipient of the help and essentially society as a whole since prosocial behaviors create a chain reaction as they progress between people. The phrase "pay it forward" attests to this chain reaction that takes place when an individual is witness to or the recipient of another's altruistic behavior and is thus motivated to help another person as well Detailed Description of the Proposal This research aims to demonstrate that there is a clear association between the occurrence of altruistic behaviors and the experience of psychological enjoyment which occurs as a result of the activation which takes place in reward related neural circuits. The discovery of supporting evidence would then suggest that evolution has bestowed human beings with the mechanisms that render altruistic behavior psychologically rewarding. My study has prevailing strengths in its abstinence from self-reported measures, which are highly subject to social desirability bias, and monetary measures of generosity which are controversial measures of altruistic actions since each individual lives within different ranges of socioeconomic status and cannot offer as much in terms of donations as others may be capable of. By using a level of deception in testing participants' willingness to help after they have received their compensation for participating in the fMRI study, I can truly see ...read more.

Participants took longer to make costly rather than noncostly decisions but they made charitable donations nonetheless. The charities which they rated as being most familiar and compassionate for were typically the ones they chose to donate to and the charities which functioned for the causes they ranked with low scores were those they ended up opposing. During periods in which they were given the pure monetary rewards and when they decided to donate, there was activation in the midbrain ventral tegmental area, the dorsal striatum and the ventral striatum which suggests that making a charitable donation and earning money for oneself activates reward related areas in the brain. The ventral striatum proved to be more active when decisions were made donate rather than accept the pure monetary reward. In regard to the correlation between the participants' self-reported engagement in real-life altruistic activities and brain activation patterns, it was found that the anterior prefrontal cortex activity that took place during costly donation periods highly correlated with the level of engagement participants reported in altruistic acts such as charitable giving. Based on these results, I have chosen to propose my study which would serve to isolate those considered "altruists" based on their level of neural activations when exposed to characteristically altruistic stimuli but instead of relying on self-reported measures of the participants' engagement in volunteering activity, I prefer to take the approach of minor deception to truly test their genuine reactions to calls of altruistic duty. I believe my study not only takes the results of the previous studies mentioned a step further, but also demonstrates a way in which we can really test the reliability of using these activations as predictors of altruism and by doing so, discover ways in which to trigger similar reactions and harness the positive effects they have on people (both in their psychological reward and resulting mental self-enhancement to the individual altruist but also in the contributions it could offer to society as a whole) in order to promote prosocial behaviors in a world that truly needs and deserves some altruistic healing. ...read more.