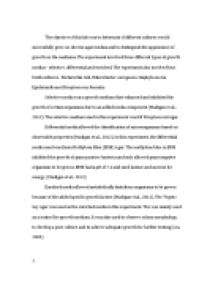 The objective of this lab was to determine if different cultures would successfully grow on diverse agar medias and to distinguish the appearance of growth on the mediums.

﻿The objective of this lab was to determine if different cultures would successfully grow on diverse agar medias and to distinguish the appearance of growth on the mediums. The experiment involved three different types of growth medias - selective, differential and enriched. The experiment also involved four broth cultures - Escherichia Coli, Enterobacter Aerogenes, Staphylococcus Epidermidis and Streptococcus Faecalis. Selective media was a growth medium that enhanced and inhibited the growth of certain organisms due to an added media component (Madigan et al., 2012). The selective medium used in this experiment was KF Streptococcal Agar. Differential media allowed the identification of microorganisms based on observable properties (Madigan et al., 2012). In this experiment, the differential media used was Eosin Methylene Blue (EMB) Agar. The methylene blue in EMB inhibited the growth of gram-positive bacteria and only allowed gram-negative organisms to be grown. EMB had a pH of 7.2 and used lactose and sucrose for energy. (Madigan et al., 2012) Enriched media allowed metabolically fastidious organisms to be grown because of the added specific growth factors (Madigan et al., 2012). ...read more.