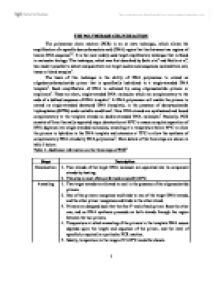 The polymerase chain reaction (PCR) is an in vitro technique, which allows the amplification of a specific deoxyribonucleic acid (DNA) region that lies between two regions of known DNA sequenc

THE POLYMERASE CHAIN REACTION The polymerase chain reaction (PCR) is an in vitro technique, which allows the amplification of a specific deoxyribonucleic acid (DNA) region that lies between two regions of known DNA sequence1,2. It is the most widely used target amplification technique that is found in molecular biology. This technique, which was first described by Saiki et al3 and Mullis et al4, has made it possible to detect and quantitate rare target nucleic acid sequences isolated from cell, tissue or blood samples5. The basis of this technique is the ability of DNA polymerase to extend an oligodeoxyribonucleotide primer that is specifically hybridized to a single-stranded DNA template5. Such amplification of DNA is achieved by using oligonucleotide primers or amplimers1. These are short, single-stranded DNA molecules which are complementary to the ends of a defined sequence of DNA template1. A DNA polymerase will enable the primers to extend on single-stranded denatured DNA (template), in the presence of deoxynucleoside triphosphates (dNTPs) under suitable conditions1. New DNA strands are synthesized and bound complementary to the template strands as double-stranded DNA molecules1. Basically, PCR consists of three thermally separated steps: denaturation at 95�C to ensure complete separation of DNA duplexes into single-stranded molecules; annealing at a temperature below 65�C to allow the primers to hybridize in the DNA template and extension at 72�C to allow the synthesis of complementary DNA strands by DNA polymerase5. More details of the three steps are shown in table 1 below: Table 1: Additional information on the three steps of PCR6 Steps Description Denaturation 1. Two strands of the target DNA molecule are separated into its component strands by heating. 2. This step is most often performed around 94-95�C. Annealing 1. Two target strands are allowed to cool in the presence of the oligonucleotide primers. 2. One of the primers recognizes and binds to one of the target DNA strands, and the other primer recognizes and binds to the other strand. ...read more.

Specificity can be increased by the use of nested primers while nested PCR is used to prevent any spurious products amplified in the first reaction by mispriming so that only genuine products will be amplified in the second reaction. Related sequences 1. Not all PCR applications aim to generate specific products. PCR can also identify families of related sequences or to amplify DNA from one species based on sequence information from another. 2. Specific primers are designed around a highly conserved domain, allowing products with differing internal sequences to be identified. 3. Degenerate oligo-nucleotide primers (DOP-PCR): a mixture of primers with alternative nucleotides at certain positions. Use a strategy, known as homology screening, which involves the design of primers around a conserved domain but incorporating all known sequences variations in the family. Unrelated sequences 1. Can help in the identification of microorganisms in, for example, infected tissue or contaminated water, allowing the correct treatment or cleansing strategy to be employed. 2. PCR is used as a simple diagnostic test allowing the unambiguous identification of microorganisms based on their nucleotide sequence. 3. Added advantage: many different species can be assayed at once by using multiple sets of primers in the same reaction (multiplex PCR), each of which generates a specific diagnostic-sized product. Arbitrary sequences 1. In here, PCR is used to produce a collection of purely arbitrary sequences, which are used as the basis for further analysis. 2. Used in cDNA cloning and gene mapping. 3. Uses arbitrary primers, which are short primers (9-15 nucleotides) that anneal to many sites and amplify a random collection of unrelated products. 4. Also useful in producing of markers for genetic and physical mapping (e.g. RAPDs or randomly amplified polymorphic DNA markers). 5. Ultimate form of arbitrary PCR is to amplify all target sequences. Can use primers that recognise the linkers (i.e. ligation adaptor, PCR, linker-primed PCR) or DOP-PCR. ...read more.

(also allele-specific hybridization, padlock probes) Transcription-based amplification; nucleic acid sequence-based amplification (NASBA) A rapid amplification procedure based on transcription and reverse transcription. The target DNA or RNA is amplified by standard techniques using primers carrying a phage promoter. Further amplification is then carried out by transcription using phage RNA polymerase. The transcripts are reverse transcribed to generate cDNA for further amplification. The transcriptions at each round compared to two-fold for PCR. Strand displacement reaction A technique similar to PCR but not requiring a denaturation step in each cycle. After extension, primers are separated from their extension product by restriction endonuclease cleavage. Further extension then proceeds by strand displacement from the resulting nick. The amplified DNA must be protected from cleavage. The polymerase chain reaction has revolutionized molecular biology by allowing the amplification and characterization of minute amount of nucleic acids6. As well as being of use to basic scientists, this technique is of immerse importance in medicine for the identification of mutations within small amounts of human DNA, and to pathologists, who routinely need to detect and characterize small amounts of infectious microorganisms6. Other uses of PCR are shown in table 9 below: Table 9: Applications / uses of PCR1 General applications / uses Molecular cloning, DNA sequencing, archaeology, forensics, amplifications of unknown sequences, clinical pathology, genetic diagnosis, characterising unknown mutations, fingerprinting / population analysis, genome analysis and quantitative PCR of DNA or RNA. Specific applications / uses (with references) 1. Rapid diagnoses of viral antigens and pathologic proteins9. 2. Detection and monitoring of virus infections10. 3. Prenatal and preimplantation genetic diagnosis of monogenic diseases11. 4. Detection of occult disease in colorectal cancer12. With the development of more methods, PCR has become much easier and more efficient to obtain more products and used in related or linked molecular biology techniques (i.e. cloning). In the future, it is believed that, together with other methods in molecular biology, PCR will help us to compare the sequence of genes, not only between present-day organisms but also compared to extinct organisms and revolutionized in the world of science and researches8. ...read more.