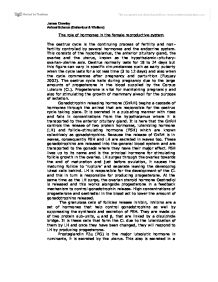 The role of hormones in the female reproductive system.

The role of hormones in the female reproductive system The oestrus cycle is the continuing process of fertility and non-fertility controlled by several hormones and the endocrine system. This consists of the hypothalamus, the anterior pituitary gland, the ovaries and the uterus, known as the hypothalamic-pituitary-ovarian-uterine axis. Oestrus normally lasts for 18 to 24 days but this figure can vary in specific circumstances such as early puberty when the cycle lasts for a lot less time (3 to 12 days) and also when the cycle commences after pregnancy and parturition (Fuquay 2002). The oestrus cycle halts during pregnancy due to the large amounts of progesterone in the blood supplied by the Corpus Luteium (CL). Progesterone is vital for maintaining pregnancy and also for stimulating the growth of mammary alveoli for the purpose of lactation. Gonadotrophin releasing hormone (GnRH) begins a cascade of hormones through the animal that are responsible for the oestrus cycle taking place. ...read more.

High concentrations of progesterone and oestradiol in the blood act to lower the amount of gonadotrophins released. The granulosa cells of follicles release inhibin, inhibins are a set of hormones that help control gonadotrophins as well by suppressing the synthesis and secretion of FSH. They are made up of two protein sub-units, ? and ?, that are linked by a disulphide bridge. It is these cells that form the CL due to the luteinization of them by LH and once they have been changed, they will respond to LH by producing progesterone. Prostaglandin F2? (PG) is the major luteolytic hormone in ruminants, it is secreted by the uterus. This also is secreted in a pulsing manner and is responsible for the lysis of the luteal cells (essentially the destruction of the CL) if pregnancy has not occured. If the ruminant is pregnant then the CL is maintained, as progesterone is needed in order to maintain the foetus. ...read more.

The contractions soon become a lot stronger and regular, more frequent intervals until the foetus is pushed into the cervix that triggers the release of oxytocin from the posterior pituitary. It is this hormone that regulates the strength and timing of the contractions until the foetus has been expelled. Some contractions still occur and a second surge of oxytocin is connected to the expulsion of the placenta. Nearly all hor monal activity ceases once the cow has calved, with some levels dropping at a very high rate. The cow returns to a normal cycle after 20 to 30 days but with the difference of showing no visible signs of it happening. This is known as a quiet or silent oestrus and will usually only happen once and will be followed by a completely normal oestrus approximately 50 days after parturition. Suckling can affect the length of time it takes to return to oestrus, with LH, FSH and GnRH pulses being inhibited by the suckling reflex. ANIM 221 Reproductive Physiology James Crawley Animal Science (Behaviour & Welfare) James Crawley Animal Science (Behaviour & Welfare) ...read more.