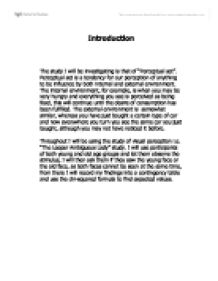 The study I will be investigating is that of &quot;Perceptual set&quot;.

Introduction The study I will be investigating is that of "Perceptual set". Perceptual set is a tendency for our perception of anything to be influence by both internal and external environment. The internal environment, for example, is when you may be very hungry and everything you see is perceived as being food, this will continue until the desire of consumption has been fulfilled. The external environment is somewhat similar, whereas you have just bought a certain type of car and now everywhere you turn you see the same car you just bought, although you may not have noticed it before. Throughout I will be using the study of visual perception i.e. "The Leeper Ambiguous Lady" study. I will use participants of both young and old age groups and let them observe the stimulus, I will then ask them if they saw the young face or the old face, as both faces cannot be seen at the same time, from there I will record my findings into a contingency table and use the chi-squared formula to find expected values. ...read more.

Hypothesis : The hypothesis of this study is that there will be a different in perception of the ambiguous stimulus depending on the age of the participants. Null hypothesis : The null hypothesis is that there will be no significant difference and any difference will be to do with chance or some other factor. D.V. (Dependant variable) : The dependant variable is the measured number of participants both old and young, who fell into the different categories. I.V. (Independent Variable) This is the study of the ages of the participants. Method The study used was a lab experiment. Design : The design used was of independent measures as both young and old people were used for the study. Participants : In total 86 participants were used these included 53 older people and 33 young people. All participants where from a foundation study of variable ages. Materials : A picture of the Leeper ambiguous lady was used in the study, a contingency table to show the data recorded, a calculator to work out the chi-squared formula and a statistical table so the critical values for 1 degree of freedom could be found. ...read more.

Discussion In the study of the Leeper Lady stimulus I found that the chi-squared formula was 10.2 whereas the critical value for DF1 was that of 3.84, with these findings I was able to establish that the hypothesis was accepted and the null hypothesis was rejected. The results from this told me that the Leeper Lady theory worked as the younger participants observed the young face and the older participants observed the old face. Shortcomings : The shortcomings could be different as the gender may have been unequal, and men maybe would have seen the young face rather than the old face. There also may have been a large age difference in the participants, or maybe very few participants took part in the study. Improvements : If I was to repeat the study I would like to try a different stimulus to see if the results were significant. The ages of the participants could be more varied or of the same age. Using the stimulus on people who work with the elderly and others who work with children could be of an interesting outcome. Name : Liz Dalzell Subject : Psychology Assignment : The Leeper Lady Study Tutor : Marietta ...read more.