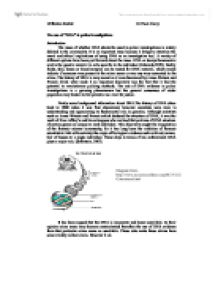 The use of "DNA" in police investigations Introduction The issue of whether DNA should be used in police investigations is widely debated in the community. It is an important issue because it brings to attention the moral and ethical implications of using DNA as an investigative tool. A variety of different options have been put forward about the issue. DNA or deoxyribosenucleic acid is the genetic material in cells specific to the individual (Edwards,1978). Bodily fluids, skin, bones or blood samples can be tested for DNA material, which would indicate if someone was present at the crime scene or was any way connected to the crime. The history of DNA is very recent as it was discovered by James Watson and Francis Crick, what made it an important discovery was the fact that it had the potential to revolutionize policing methods. The use of DNA evidence in police investigations is a growing phenomenon but the general consensus of wider population may hinder its full potential as a tool for justice. Firstly some background information about DNA.The history of DNA dates back to 1868 when it was first discovered, however scientists were slow in understanding and appreciating its fundamental role in genetics. Although scientists such as James Watson and Francis critick deduced the structure of DNA, it was the work of Alec Jeffery's and his colleagues who realized that portions of DNA structure of certain genes are unique to each individual. ...read more.

Indeed DNA evidence plays a major role however it must be said that all the evidence is considered and DNA never reported in isolation. The reliability of DNA evidence has been proven in terms of statistics. For example since April 1995 the British have gathered DNA profiles of more than 500,000 criminals - the no grows weekly and police have linked 70,000 suspects to crime through the aid of DNA evidence, a clear indication of reliability of DNA as an investigative tool. Moreover even when the police have not been able to identify a suspect, DNA testing has linked together more than 8,200 crimes scenes. This means that the investigators realize early on that they're after the same perpetrator for more than 2 crimes. This knowledge is extremely important because the evidence found from different crime scenes can be linked to form better intelligence and the more chance the crime will be solved. This ability is most important in r**e cases whereby having the knowledge if the perpetrator has committed the same crime enables investigators to track him down and hence bring the person to justice. The use of DNA evidence is not only important in violent crimes such as murders and rapes but also to establish paternity in custody. ...read more.

Future developments in the DNA fingerprinting would mean the possibility to obtain amplification products of a larger size, the amount of information that could be obtained and analysed in a single run would increase.9Krawczak and Schmidtke,1994) In addition to this, there are discoveries of how to extract DNA from burned and old bones. This is important discovery as it will allow police to find out the identity of anyone who was burned after the murder. (A Simple and Efficient Method for Extracting DNA From Old and Burned Bone, J Forensic Sci, July 2004, Vol. 49, No. 4) In the future there must be reduction in the likelihood of innocent persons being Wrongly convicted, just as there should be increase in the chance of guilty parties being identified and held responsible for the crimes they commit. This can be Achieved through continued refinement of DNA technology, coupled with Better training and procedures to ensure that evidence is skilfully gathered, Stored, and submitted for analysis. When used properly and appropriately, To summarize, DNA evidence should not only remain as a tool for law enforcement but its use should be exteneded.It is clear that the use of DNA has many utilities and is an important necessary tool in the fight against crime. The implications for not extending the use of DNA would result in more crimes of violent nature being unsolved and justice not being served. ...read more.