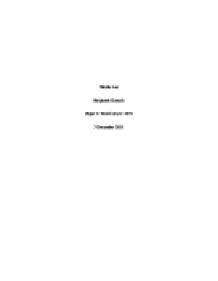 Nicole Lee Benjamin Kozuch Paper 2: Word Count: 1972 7 December 2011 Theories of Death What constitutes death? Is it the heart and lungs inability to function (cardiopulmonary death)? The termination of the overall brain and brain stem functions (brain death)? Or better yet, the dissolution of consciousness (neocortical death)? Within this paper I'm going to further define these three theories of death and execute an argument pertaining to why brain death is more favorable. This will be achieved by detailing the advantages and disadvantages concerning neocortical death and brain death. Then lastly, I want to touch base on any objections the reader may have against my argument and vindicate why these objections are not problematic in relation to my argument. When considering what constitutes death, we can categorize our ideologies into three increasingly substantial theories: cardiopulmonary death theory, brain death theory and neocortical death theory. Cardiopulmonary death theory refers to death as the irreversible loss of function of the heart and lungs (DeGrazia, 2011). It is only with the demise of these vital bodily operators that the body is conceived to be dead. Theorists who favor this concept further note that individuals who are classified as brain dead, but require the utilization of mechanical assistance, are still considered alive for their cardiopulmonary functions still persist. Advantages to the theory of cardiopulmonary death enable physicians, with the consent of the patient, to be able to disconnect the respirator-dependent patient resulting in the death of the patient through cardiac arrest. ...read more.

The term consciousness is implied broadly, encompassing any subjective experiences, which permits both wakeful and dreaming states (Webster, 2011). It is only when an individual is unable to return to consciousness upon entering a state, that they are pronounced dead. Furthermore, when envisioning a person in a coma, we can presume that if a person descends into a permanent coma (PVS), they are identified as deceased regardless of a sustained brainstem function that facilitates cardiopulmonary operations. This fatality is due to the loss of neurological hardware which generates consciousness. Some advantages that correspond with neocortical death theory are conceptually dependent on a view of what constitutes our personhood. A person's personhood is dependent on the idea that conscious beings are individuals that retain complex psychological capacities such as rationality, self-awareness and memory. If a person was unable to maintain this capacity for consciousness at any given time they would ultimately be considered dead based on neocortical death standards. The advantage to this view is that it makes it easier to harvest organs from vegetative patients who are typically viewed as permanently unconscious beings. Disadvantages to neocortical death view, pertains to the inability to reliably gauge the presences or absence of consciousness. At this time we are currently unable to determine what the neural correlations of consciousness are, which in turn would help us determine which higher-brain functions are irretrievably lost (Farah, 2010). Furthermore, since neocortical death theory primarily pertains to persons in a vegetative state, we cannot necessarily assume that function won't return because of the presence of reduced cortical blood flow. ...read more.

They go against brain death theorist in stating that "it's not important who or what is powering the breathing and heartbeat, just that they occur (DeGrazia, 2011)." Cardiopulmonary theorists believe that even with vital functions being totally reliant on external assistance, one cannot infer that death has taken place. They may further rationalize this claim, by giving supportive evidence that states that fetuses that are completely reliant on their mothers are still alive. Brain death theory counters this assumption by asserting that a body is not truly functioning for the respirator is performing all the work, indicating death. This is convincing for the body, without the assistance of the respirator will, as a result of the disconnection to the respirator, will die. Neocortical death also disputes against brain death by claiming that without consciousness we are nonexistent because we have lost our personhood. Brain death theorist will argue that there is no true way of measuring for consciousness so we cannot assume that we are dead based off of a conscious awareness. As discussed earlier some diseases result in a loss of capacity for consciousness such as dementia, but we can see clearly that these people are still alive, just lost in a different mind frame. In conclusion brain death theory best explains the concept of death for the functioning of the brain and brain stem cannot be replicated deducing its criticality. Cardiopulmonary theory is less creditable in respect to its ability to replicate human functions (respiration and blood circulation) and since we can neither demonstrate nor measure consciousness, neocortical death is to insufficient a criterion for establishing death. ...read more.