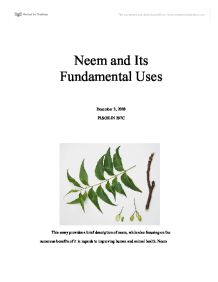 This essay provides a brief description of neem, while also focusing on the numerous benefits of it in regards to improving human and animal health. Neem (Azadirachta indica), a central Ayurvedic medicine and rising global panacea, is a fast-growing tree

Neem and Its Fundamental Uses December 3, 2008 PLSOILIN 297C This essay provides a brief description of neem, while also focusing on the numerous benefits of it in regards to improving human and animal health. Neem (Azadirachta indica), a central Ayurvedic medicine and rising global panacea, is a fast-growing tree that reaches an average height of 15-20 meters and can be found in at least 30 countries worldwide. These countries include Asia, where it is native to the Indian sub-continent, Africa, Central/South America and some successful plantations in the United States. The neem is well adapted to a wide range of climates since it thrives well in sub-arid to sub-humid conditions while also tolerable to cold weather at 00C up to altitudes of 1500 m. It is notably resistant to the adverse affects of extreme droughts and is able to grow in places where the average rainfall is well below 300 mm. As a result of its lax demands on soil fertility, the neem tree can grow in a wide variety of places. These can range from eroded hilltops with infertile lands to stony, flat lands and firm laterite. ...read more.

Through the diagnosis of the sections of neem, scientists have been able to utilize the chemicals into medicinal uses, predicting beneficial for the improvement of human struggles and mortal limitations. For example, a 1993 preliminary study by the National Institutes of Health reported positive results in vitro tests where neem bark extracts killed the AIDS virus. This can be due to the dual effect of modulating polysaccharide compounds responsible for increasing antibody production and stimulating immune function by enhancing cellular mediated response to ward off the infections accompanying AIDS. Neem has been proven effective against relieving inflamed joints than compared to aspirin, ibuprofen and other over-the-counter drugs which can cause bleeding in the upper GI tract. It has the unique power to restore balance in the immune system, which can directly affect the progression of arthritis. Several studies have been undertaken to identify the compound that possesses the anti-inflammatory effects. Suggestions include the phenol compound catechin, quercetin and the polysaccharides essential to neem. Neem has also proven to be a powerful, yet inexpensive birth control agent for both men and women since the first century B.C. ...read more.

Practitioners and shamans believed that neem's bitter qualities counteract the high sugar levels in the body that are known to cause skin diseases. In additional to its uses in treating skin problems, it is equally powerful in healing viral diseases such as smallpox, chickenpox, fowl-pox, Staphylococcus bacterium, herpes virus and hepatitis B since the neem leaf extract absorb the virus and prevents them from spreading to unaffected cells. There are many other uses that the products of neem can be utilized to benefit humans and animals alike. Neem has blessed the Indian sub-continent for centuries and has since become linked to the history of the Indian civilization. In relatively recent times, it has become widely used and recognized around the world as an omnipotent answer to diseases. It is no wonder that 75% of Ayurvedic formulations use some form of neem and it is known to cure more than 100 diseases! With more research money being invested in the science behind neem, there is no doubt that we would only uncover an exponential amount of information relative to this beautiful plant, as well as debunk several myths about it. ...read more.