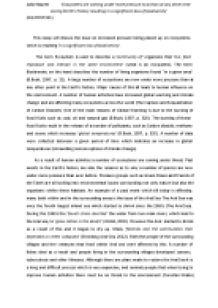 This essay will discuss the issue on increased pressure being placed up on ecosystems which is resulting 'in a significant loss of biodiversity'.

﻿Juhie Nazeer 'Ecosystems are coming under more pressure now than at any other time during Earth's History resulting in a significant loss of biodiversity' (W137787321) This essay will discuss the issue on increased pressure being placed up on ecosystems which is resulting 'in a significant loss of biodiversity'. The term Ecosystem is used to describe a 'community of' organisms that 'live, feed reproduce and interact in the same environment' (what is an ecosystem). The term Biodiversity on the hand describes the number of living organisms found "in a given area" (B.Bush, 1997, p. 21). A large number of ecosystems are now under more pressure than at any other point in the Earth's history. Major causes of this all leads to human influence on the environment. A number of human activities have increased global warming and climate change and are affecting many ecosystems across the world (The Capture and Sequestration of Carbon Dioxide). One of the main reasons of Global Warming is due to the burning of fossil fuels such as coal, oil and natural gas (B.Bush, 1997, p. ...read more.

Although there are plans made to restore the Aral Sea it is a long and difficult process which is very expensive, and reminds people that when trying to improve human activities there must be no threat to the environment (Forestier-Walker, 2012). Yet another example of ecosystems being under threat would be the Cerrado which is one of the most biodiverse regions. There had been deforestation of an area of over 14 000 km2 per year 'between 2002 and 2008' (Ecosystems and Wild life under threat). A large number of 60 'animal species' and nearly 300 plant species can be found in the Cerrado most of which are endangered due to deforestation and farming. Coral reefs are well known ecosystems that are endangered. These are habitats to a number marine species and are full of biodiversity. Coral reefs and 'freshwater organisms' are now under threat due to the unethical methods of fishing such as the use of cyanide and dynamite (The World's Most Endangered Ecosystems: Coral Reefs, 2010). ...read more.

Already the worst water polluted country in the world is China with about 70% of its waters being polluted by a number of different water pollutants 20% of which are produced by Chinese industries (Dirty Laundry ). According to studies into Chinese water pollution found species of fishes that had consumed 'hormone-disrupting pollutants' (Dirty Laundry), which in turn could affect other species connected to the food chain, including humans. Overall, a large number of human activities affect many ecosystems and the biodiversity within them. These are only some of the many ecosystems and species that are under threat due to human activities such as oil drilling, discharging toxic wastes into marine life systems, over fishing and methods of fishing and many more. Although work is being done by governments and pressure groups to help protect the environment less is being done by the public in order to help the situation. However now, due to better and improved technology and scientific research, there are chances of recovering damaged ecosystems and protecting those that are now under threat. Already some projects are taking place in order to recover damaged ecosystems such as the Aral Sea. ...read more.