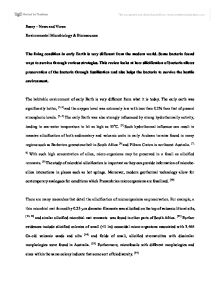 This review looks at how silicification of bacteria allows preservation of the bacteria through fossilisation and also helps the bacteria to survive the hostile environment.

Essay - News and Views Environmental Microbiology & Bioresources The living condition in early Earth is very different from the modern world. Some bacteria found ways to survive through various strategies. This review looks at how silicification of bacteria allows preservation of the bacteria through fossilisation and also helps the bacteria to survive the hostile environment. The habitable environment of early Earth is very different from what it is today. The early earth was significantly hotter, [1, 2] and the oxygen level was extremely low with less than 0.2% than that of present atmospheric levels. [3, 4] The early Earth was also strongly influenced by strong hydrothermally activity, leading to sea-water temperature to hit as high as 55oC. [5] Such hydrothermal influence can result in massive silicification of both sedimentary and volcanic units in early Archean terrains found in many regions such as Barberton greenstone belt in South Africa [6] and Pilbara Craton in northwest Australia. [7, 8] With such high concentration of silica, micro-organisms may be preserved in a fossil as silicified remnants. [9] The study of microbial silicification is important as they can provide information of microbe-silica interactions in places such as hot springs. ...read more.

Such directed biosilicification localization of live cell surfaces might also be another bacterial strategy to protect the cell functionality against any potentially inhibitory effects of mineral encrustation. Moreover, the unipolar biomineralization pattern is consistent with regulated cell polarity in bacteria, which favours silica biomineralization to the polar end of the cell. Colloidal SiO2 is net positively charged at the experimental pH 3, which is a similar environment to early earth. This indicated that cell polar end encrusted with CSiO2 would have a negative charge. By localizing biosilicification away from the cell core housing their photosynthetic machinery, these bacteria can minimize cell functional impairment and strategically increase their survival chances in silica-rich environments. [32] While bacterial encrustation with CSiO2 forming insoluble crust can be detrimental to the microbes functionality, [33] the cell-regulated directional localization of CSiO2 may be yet another strategy to indiscriminate mineral encrustation of the cell core thereby maintaining exposure of the cell's photosynthetic components such as thylakoid membranes and enabling photosynthetic light harvesting capabilities. [34] In conclusion, silicification could be metabolically driven process and that some bacteria such as cyanobacteria do exert some degree of control to exert and mange their surface biomineralization burden in order to maintain the cell core functions, which are consistent with known bacterial strategies to avoid or delay cell entombment. ...read more.