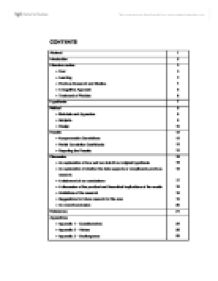 This study attempts to explore the basis of people's fear of animals.

CONTENTS Abstract 1 Introduction 2 Literature review 3 * Fear 3 * Learning 3 * Previous Research and Studies 4 * A Cognitive Approach 5 * Treatment of Phobias 6 Hypothesis 7 Method 9 * Materials and Apparatus 9 * Subjects 9 * Design 10 Results 12 * Nonparametric Correlations 12 * Partial Correlation Coefficients 12 * Reporting the Results 12 Discussion 16 * An explanation of how well our data fit our original hypothesis 16 * An explanation of whether the data supports or compliments previous research. 16 * A statement of our conclusions 17 * A discussion of the practical and theoretical implications of the results 18 * Limitations of the research 18 * Suggestions for future research in this area 19 * An overall conclusion 20 References 21 Appendices * Appendix 1 - Questionnaires 22 * Appendix 2 - Values 26 * Appendix 3 - Scattergrams 28 ABSTRACT This study attempts to explore the basis of people's fear of animals. Specifically, it seeks to explore the views of 126 individuals, with a majority of Maltese and a minority of foreigners. This study adopts a quantitative methodology. Data is gathered using questionnaire surveys assigned to each individual. Analysis of data uses spearman's Rho correlation and a first-order partial correlation derived from Guilford and Fruchter. Data derived shows a strong positive correlation between perceived fear and perceived strangeness. To conclude, the results may be bringing out the fact that the appearance of the different animals is the strongest factor relating to the fear of them. INTRODUCTION Our study regarding the fear of small animals is a replica of the original study conducted by Bennett-Levy and Marteau; who showed that a correlation existed between people's fear of some small animals and the animal's physical form. Their findings indicate that the more they differ from the human figure, the more fear they are likely to evoke. ...read more.

To measure the way individuals perceived the animal characteristics mentioned above (i.e. fear, harmfulness, strangeness), they were told to circle one of the three responses; that which most closely corresponded to their feelings. In order to assess the third hypothesis directly (predicted positive correlation between perceived fear and strangeness), perceived harmfulness was controlled for. This was done in the following two ways: 1. Removing each of the animals and insects having an average harmfulness rating of two or more, and 2. Carrying out a first order partial correlation. Procedure Within this research, a variety of animals were investigated on the three above mentioned variables. Subjects had to assess the animals and insects on all three, therefore stating how afraid, harmful, or "ugly" (for strangeness) each and every animal is. This was done to compare with the original study of Bennett-Levy and Marteau. Since one rating of a questionnaire might have had an effect on the following one, questionnaires were given out in six different orders to cancel out the bias. Since our sample was that of 126 subjects, this counterbalance was possible. The order of presentation can be seen below: Subject no. First Second Third 1 Strangeness Fear Harmfulness 2 Strangeness Harmfulness Fear 3 Fear Strangeness Harmfulness 4 Harmfulness Strangeness Fear 5 Fear Harmfulness Strangeness 6 Harmfulness Fear Strangeness All members of the research team carried out the data collections. The questionnaires were administered in various settings, and at various times. Subjects were thanked before filling in the questionnaire, and were told that there was no right or wrong answer. They were also informed to circle the first characteristic that came to mind, when associating it with the animal in question. They were told that they could fill them in at their own time and pace; in addition to the fact that their name will not be used, and that the results would be confidential. ...read more.

5. Since questionnaires were only constructed in English, foreigners taking the questionnaire might have had problems in understanding what some animals really were, thus leaving them confused about the nature of the animal. This may have resulted in them just circling an answer for the sake of not leaving out anything, thus not representing their true emotions. 6. The individuals' mood may have affected the way they responded. Questionnaires were handed out one after the other, without time intervals between them, thus the individuals mood was stable across all three. Suggestions for future research in this area After reviewing our work and bearing in mind the limitations it brought about, our team acknowledges that the matter researched could be looked at in much more breath and depth and from many different angles. Unfortunately we didn't have the resources and experience needed to investigate further. Maybe future researches interested in the matter could do more. Here are some of our suggestions: * Instead of administering questioners, examining the animals "in vivo" may be another possibilty. For example you could put participants in a room with the animal in question and take notes of reactions; * Additional research could be done with people living in the country or more rural environments compared to inner city inhabitants; * A pretest, followed by an intensive educational course about the animal(s) in questions should be carried out, after which one may compare the results with the posttest; * Explore the phenomenon of Steve Irwin, Jeff Corbin, or any other animal lover capable of holding just about anything in their hands, and find out what exactly makes them immune to animal phobias. An overall conclusion After viewing our results, we came to the conclusion that individuals fear animals to different degrees. Therefore we think that animal phobias are more likely to be learnt; however we are not ruling out the possibility of it being innate. ...read more.