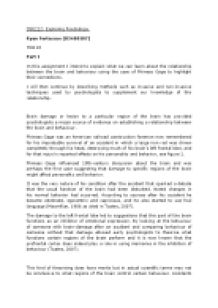 TMA02 DSE212. I intend to explain what we can learn about the relationship between the brain and behaviour using the case of Phineas Gage

﻿DSE212: Exploring Psychology Ryan Fortescue (B3480587) TMA 02 Part I In this assignment I intend to explain what we can learn about the relationship between the brain and behaviour using the case of Phineas Gage to highlight their connections. I will then continue by describing methods such as invasive and non-invasive techniques used by psychologists to supplement our knowledge of this relationship. Brain damage or lesion to a particular region of the brain has provided psychologists a major source of evidence on establishing a relationship between the brain and behaviour. Phineas Gage was an American railroad construction foreman now remembered for his improbable survival of an accident in which a large iron rod was driven completely through his head, destroying much of his brain's left frontal lobe, and for that injury's reported effects on his personality and behavior, see figure 1. Phineas Gage influenced 19th-century discussion about the brain and was perhaps the first case suggesting that damage to specific regions of the brain might affect personality and behavior. It was the very nature of his condition after the accident that sparked a debate that the usual function of the brain had been disturbed. Noted changes in his normal behavior had occurred. According to sources after his accident he became obstinate, egocentric and capricious, and he also started to use foul language (Macmillan, 1986 as cited in Toates, 2007). ...read more.

Word Count 1042 References Macmillan, M.B. (1986) ?a wonderful journey through skull and brains: The Travels of Mr Gage?s tamping iron?, Brain and Cognition, vol.5, pp.67?107. Miell, D., Pheonix, A., Thomas, K., Toates,F. (2002) Mapping Psychology (2nd Edition 2007), Milton Keynes, The Open University. Raine, A., Buchsbaum, M. and LaCasse, L. (1997) ?Brain abnormalities in Murderers indicated by positron emission tomography?, Biological Psychiatry, vol.42, pp.495?508. Toates, F. (2001) Biological Psychology: An Integrative Approach, Harlow, Pearson Educational. Wall, P.D. (1993) ?Pain Figure 1 (Historical Diagram (uncited) obtained from Internet, http://en.wikipedia.org/wiki/File:Phineas_gage_-_1868_skull_diagram.jpg 2009) Self-Reflection I did enjoy this assignment, but because of personal issues I did fall behind on my studies and the first part of the assignment was more rushed than I would have preferred. I am still finding referencing difficult. Part II Question 1 1. The two variables shown are ?Nutritional Rating of Packed Lunch? and ?Mean Response Time per Slide in Milliseconds. 2. (ii) Negative. 3. (iii) Medium. 4. (iv) Speed of responding in a distraction task in the afternoon is a fair predictor of the nutritional quality of a child?s packed lunch. 5. (i) Positive ? There appears to be over +0.9 relatable correlation i.e. as one of the variables increase so does the other. 6. If known, the parents may have deviated from their normal pattern of behaviour. Parents who would not normally provide a packed lunch high in nutritional value may have done so for an impression of the norm resulting in all the children participating with similar lunches. ...read more.

The information will be presented to the participant using the same format, printing style and typeface, conferring with other participants will also be made difficult by this. Experimenter effects ? this will be minimised by having no-one else in the room with participants. Experiment assistants will be given the envelope each day in random order and will not be aware of which set of words have been issued to the participant. The participant will remain anonymous and will be identified by an assigned number on the envelope. Once the assistant has left the room the participant will open the envelope and will begin when signalled to do so by indicator placed in the room. When signalled to end after five minutes the participant will seal the words back in the envelope and return in one hour to complete the test. The experiment assistant will then attach the answers provided to the envelope and return to me ? thus allowing for double blind testing. Differences in participants over time ? Although testing will be done over three days, the test itself is relatively short. This will avoid fatigue and boredom. Setting the time every day at noon for the experiment will help establish routine and hopefully behaviour of the 10 participants over the time period. There are also enough participants to reduce individual differences. The random allocation of the independent variable will also help reduce this. Figure 1: Front and lateral view of the cranium, representing the direction in which the iron traversed its cavity. (Wikipedia 2010) ...read more.