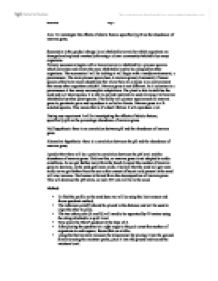 To investigate the effects of abiotic factors specifically pH on the abundance of marram grass.

Without the correct metabolic processes occurring the plant will eventually die. Pioneer species such as Marram grass, often have many adaptations that allow them to colonise in an environment that many other organisms couldn't. As marram grass colonises in a psammosere it has many xeromorphic adaptations. Marram grass is a R-selected species.1 This means that in it's short lifetime it will reproduce a lot. The plant is able to stabilise the sand and as it decomposes, it is able to provide nutrients to sand making the sand habitable for other plant species. The ability of a pioneer species such as marram grass to germinate grow and reproduce is called an Ecesis. Some of these xeromorphic adaptations are: Long thin leaves - these leaves roll up in dry conditions. This means that the stomata are hidden into the underside of the leaf. The stomata are away from the strong sea breeze. Moist air is trapped within the leaves, which lengthens the diffusion pathway as the water evaporates into the inner area of the leaf and not into the atmosphere, this creates a local humidity and so transpiration occurs more slowly. Hair on leaves (trichores) - the hair on leaves reduces the air current around the stomata making it more humid, this therefore reduces the rate of transpiration. On this picture > 2 you can see the small hairs which maintain the humidity of the plant. Undersides of leaves are smooth and glossy - the smooth and glossy nature of the leaves allows it to reduce the transpiration rate. As the leaves roll up, the underside of the leaves are more exposed to the harsh conditions of the psammosere. The underside is bluish coloured, which helps the plant reflect extreme sunlight Ridges along leaves - the ridges along the leaves again the stomata to be sunken deeply. The ridges also help break up the flow of the wind current reducing transpiration. ...read more.

2 Quadrant size The size of the quadrant we used was too small for the area being measured. The small size of 50cm� did not enable us to gain a comprehensible overview of the abundance of species between the ranging poles. The amount of marram grass present in one quadrant may not be sufficient enough to assume that this was the same for the 10m between the ranging poles. The quadrant may give a false representation of the actual number of species in the given area. Use a bigger quadrant 1m� Although a smaller quadrant has a lower percentage error a bigger quadrant is necessary purely because of the amount of land that was used in the experiment. A larger sized quadrant would enable me to observe a better depiction of the land within the sample. 3 Inbuilt errors Inbuilt errors such as the seawater used could have affected the reliability of the results. The sea water has a solute potential which means that when it was infiltrated the experiment would have taken longer then usual as the osmotic difference changed the rate at which he water was absorbed. Also the water may have contained debris, which again would have added to the solute potential decreasing the rate of infiltration. 4 No standardisation of technique 5 Weather The error bars show the range of results above and below the point, which has been plotted. The point that has been plotted is the mean. The smaller the error bars the more accurate my results and therefore the more reliable my experiment. As you can see from the graph, error bars of four points cross the trend line. This means that these points were very accurate and reliable. The point at a pH of 7.0 is close to the trend line showing that result could be considered accurate and may have been distorted a bit because of an error with apparatus. 1 http://www.microscopy-uk.net/mag/articles/anne1.html 2 http://www.mrothery.co.uk/PowerPoints/xerophytes.ppt ?? ?? ?? ?? Sneha Patel Page 1 ...read more.