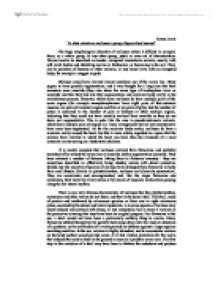 To what extent are molluscs a group of specialised worms?

Emma Jarvis To what extent are molluscs a group of specialised worms? The huge morphological diversity of molluscs makes it difficult to compare them, as a whole group, to any other group, phyla or even set of characteristics. Worms tend to be described as slender, elongated invertebrate animals, usually with soft moist bodies and inhabiting marine or freshwater, or burrowing in the soil. They can be parasites of humans or other animals, or any insect larva with an elongated body, for example a maggot or grub. Molluscs could have evolved almost anywhere out of the worm line. Many appear to have possible segmentation, and it was thought for a long time that their ancestors were annelids (they also share the same type of trochophore larva as annelids) and that they had lost their segmentation and coelomic body cavity in the evolutionary process. However, whilst some molluscs do have multiple pairs of the same organs (for example monoplacophorans have eight pairs of foot-retractor muscles, six pairs of excretory organs and five or six pairs of gills), but the number of plates is unrelated to the number of gills or kidneys or other multiple organs, indicating that they could not have actually evolved from annelids as they do not show real segmentation. This is quite like the case in pseudometameric animals, which have multiple pairs of organs in a linear arrangement but are not considered to have once been segmented. ...read more.

However, the rest of the body was so well protected form predation that the exposed gills on the shell surface really disadvantaged the animals, and gradually they moved down to the bottom of the shell and onto the animal. The shell became raised to make room for the gills underneath. We can see that the shells keeps rising throughout the fossil records, providing more room for both gills and gonads. There is plenty of carbon available in the sea for the molluscs to make use of, and the support of the sea makes it easy to carry a relatively large shell. However, there is an upper limit, as beyond a certain size the shell can get caught up in strong currents and push the animal over so it cannot get up. This meant that the shell could not get beyond a certain size, until a mutation changed the direction of growth, making the shell spiral, like the snail we now see. As the sea-snails moved onto land, the shell size had to be drastically reduced as the animal could not carry the shell without the supporting weight of the water. The land molluscs have very thin shells. Apart from that, it was not too difficult for the molluscs to move from the sea onto the land, as they are one of the very few groups of animals to possess the enzymes capable of breaking down the refractory structural carbohydrates which characterise the larger sea-weeds and the land plants. ...read more.

They lack eyes and sensory tentacles, but have a radula, a single median jaw, and paired clusters of narrowed, clubbed contractile filaments called the captacula, used for deposit feeding. The cephalopods are the most sophisticated class of molluscs. The anterior region of the embryonic foot develops into a series of prehensile arms or tentacles around the mouth, and the posterior portion forms a muscular funnel around part of the opening of the mantle cavity, which can take in and forcibly expel water to provide movement for the animal. They, like the gastropods, are elongated in the dorsoventral plane. Prey is caught by the arms, but many cephalopods are large animals catching large prey that have to be macerated by a pair of beak-like jaws before worked on by the radula. The nautiloidea have a single, external planospiral shell, only the last chamber of which is occupied. The coleoidea however show a marked reduction in shell (which is often lost) and are much more proficient swimmers. They also possess a closed blood system and a highly concentrated nervous system, which includes well-developed eyes. Despite the diversity I have just discussed, it is from roughly the animal described in the first few paragraphs of this essay, adapted from the flatworm but with the addition of a shell, gills, and improved feeding apparatus, which most modern molluscs developed from. There are currently many diverse species of mollusc, but all share characteristics that link them back to this animal - a specialised worm. ...read more.