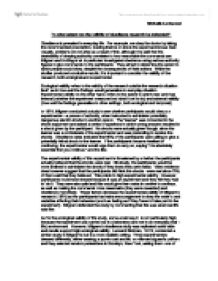 To what extent can the validity of obedience research be defended?

To what extent can the validity of obedience research be defended? Obedience is prevalent in everyday life. For example, we obey the doctor by taking the recommended prescription, trusting that he or she is the expert and knows best. Usually, problems do not arise as a result of this, although it is said that the desirability of obeying authority correlates to how reasonable the commands are. Milgram and Hofling et al. in particular investigated obedience using various authority figures to give commands to the participants. They aimed to determine the extent to which people would obey, despite the consequences of their actions. While the studies produced conclusive results, it is important to consider the validity of the research, both ecological and experimental. Ecological validity refers to the validity of the research outside the research situation itself, as in how well the findings would generalise to everyday situation. Experimental validity on the other hand, refers to the extent to which research has internal (whether the experiment measured out what it set to do) and external validity (how well the findings generalise to other settings, both ecological and temporal). ...read more.

They were also paid and this would give them extra incentive to continue, as well as making the commands more reasonable (they were rewarded) and obedience more likely. These factors decrease the experimental validity of Milgram's research (1974) as the participants had extra encouragement to obey the orders and variables affecting their behaviour (such as feeling as if they 'have to' take part in the experiment). Milgram defended the study by commenting that this was what real life was like. As for the ecological validity of this study, some would say it is not particularly high because the experiment was carried out in a laboratory and not in an everyday (real-life) environment. However, Milgram's obedience study was replicated world wide and results support high ecological validity. Leonard Bickman, 1974, conducted a similar study to Milgram's but in a more realistic setting. Three experimenters dressed differently, either wearing a sports coat and tie, or milkman's/guard's uniform and they selected random pedestrians in Brooklyn, New York, asking them one of three varying orders. Bickman found that the participants were more likely to obey the experimenter dressed as a guard than the milkman or civilian, supporting Milgram's finding that obedience can be related to the amount of perceived authority and the ecological validity of his study. ...read more.

Shockingly, 21 of the 22 nurses in the study obeyed "Dr. Smith" and were willing to give the 20mg dose of Astrogen. The ecological validity of this experiment was undeniably high since the findings would directly generalise with everyday situations, especially as the study was conducted in the primary environment that the situation would be found in. It was a real-life experiment. Situations with similar authority figures could include a policeman ordering a citizen to break the law, since the citizen would recognise the authority of the policeman and would probably agree to their orders, despite the implications of doing so. The nurses in Hofling's study recognised that the dosage they were told to administer was above the maximum, but because the doctor has more knowledge of medicine and a sense of authority over the nurses, they obeyed. Thus the commands of the doctor, in spite of breaking rules, seemed more reasonable to the nurses. As for the experimental validity of Hofling's study, the nurses never questioned the authenticity of the Dr. Smith, thus indicating that they believed he was a real doctor and behaved as they would in a non-experimental situation. This would indicate high experimental validity, however, replications of Hofling's study by Rank and Jacobsen (1977) for example, have failed. Michelle Lockwood ...read more.