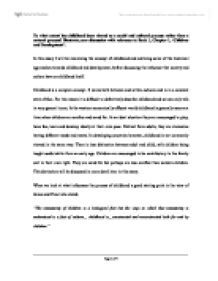 To what extent has childhood been viewed as a social and cultural process rather than a natural process?

To what extent has childhood been viewed as a social and cultural process rather than a natural process? Illustrate your discussion with reference to Book 1, Chapter 1, 'Children and Development'. In this essay I will be examining the concept of childhood and outlining some of the historical approaches towards childhood and development, before discussing the influence that society and culture have on childhood itself. Childhood is a complex concept. It varies both between and within cultures and is in a constant state of flux. For this reason it is difficult to definitively describe childhood and we can only talk in very general terms. In the western economically affluent world childhood is generally seen as a time when children are carefree and cared for. In an ideal situation they are encouraged to play, have fun, learn and develop ideally at their own pace. Distinct from adults, they are viewed as having different needs and wants. In developing countries however, childhood is not commonly viewed in the same way. There is less distinction between adult and child, with children being taught useful skills from an early age. ...read more.

Children are born with a framework into which external factors such as society and culture are organised and understood. Development is a two way process and the child is active not passive. The approaches outlined above provide the basis for contemporary theories that emphasis the role of society and culture on childhood development. One such theory is that of Super and Harkness. They proposed something called the 'Developmental Niche' which the diagram below illustrates: Super and Harkness (1986) Super and Harkness created this theory as a way of attempting to understand how common features of childhood development diversify according to culture. As we can see in the diagram, the developmental niche believes the most important influences on development include their habitat - where they live, who they live with, how wealthy they are, whether they go to school, general structure of their days, their culture of parenting - how they are raised, how the parents treat the child and finally what they called the 'ethnotheories' of the parents - how well the parents want to the child to do in life and whether they can actually affect this. ...read more.

Thinking about universal truths in childhood development, we can draw comparisons in the way that children use play as a learning tool no matter what culture they are in. We could say that the way they develop is similar, learning through imitation, necessity and by example. If these universal truths are accepted then we must accept that nature does play some part in childhood development. What they learn may vary according to what their society needs them to learn but the way they develop is the same, shaped by natural processes. It seems that, as ever, the more acceptable approach would be the middle ground, in this case the views of Kant seem particularly valid. It could be argued that the pattern of development itself is a universal truth, that children develop in the same way, the only difference is what they develop. Account therefore should be given to nature as well as society and culture. To conclude, society and culture appear to greatly influence childhood development. They provide the background, the input and shape the result of development. However it seems acceptable to suggest that nature provides the starting point and framework for this development and so this essay concludes that although society and culture provide the major influences, nature plays a minor but essential part too. ...read more.