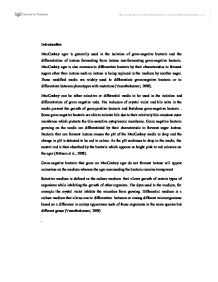 Use of selective and differential media to identify bacteria

. Non-fastidious are organisms produce their own nutrients do not need special agar to grow. Thus, based on this experiment, nutrient agar is a non-selective medium that allows all four organisms to grow which is Bacillus megaterium ,Enterococcus faecalis, Esherichia coli and Proteus vulgaris. As MacConkey agar plate 1 contains bile salt 2, which inhibits the growth of most Gram-positive bacteria except the enterococci. MacConkey agar plate 3 contains bile salt 3 that allows only the Gram negative organism to grow. This can be shown on the table above as when the mixed broth culture is inoculated to the Mac 3 plate, only Esherichia coli and Proteus vulgaris can be seen growing in the media (Vasanthakumari, 2009) . Conclusion Based on the experiment, it can be concluded that Bacillus megaterium are rod-shaped and arranged in a chain-like sequence. Besides, Enterococcus faecalis is spherical in shape and usually grouped in pairs. Esherichia coli are rod- shaped and arranged in clusters. Lastly Proteus vulgaris are rod shaped and usually randomly arranged with no particular arrangement. Only the Gram negative bacteria are able to grow on the MacConkey 3 plate . MacConkey agar plate 1 inhibits the growth of most Gram positive bacteria which is why Enterococcus faecalis can be seen growing in the media. ...read more.