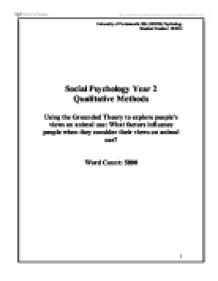 Social Psychology Year 2 Qualitative Methods Using the Grounded Theory to explore people's views on animal use: What factors influence people when they consider their views on animal use? Word Count: 5800 Introduction: Social psychologists use the term 'attitude' to refer to people's evaluations of virtually any aspect of the social world. People can have favourable or unfavourable reactions to issues, ideas, specific individuals, entire social groups, objects and even animals (Baron, Byrne, & Branscombe, 2006). Often, attitudes are ambivalent in that we evaluate the attitude object/issue both positively or negatively. Attitudes are often acquired from others through social learning (classical conditioning, instrumental conditioning or observational learning. Strong attitudes are most likely when they are based on extreme beliefs and personal experience with the attitude object which thereby is more likely to affect their behaviour (Baron, Byrne & Branscombe, 2006). One issue of the social world that people often form strong attitudes towards is that of 'animal use'. The term 'animal use' is used to describe a range of practices that involve the use of non-human animals by human beings, from using animals to test drugs, to aid the development of medical procedures, to using animals for their fur, to keeping animals as pets or even for entertainment purposes. Animal use procedures can often benefit society through advancement on medical knowledge however; the cost of this does have its drawbacks of inflicting pain and often resulting in the death to a large extent of animals. This therefore reflects the idea of ambivalence in attitudes as some individuals may be torn between feeling positively about the use of animals for increasing medical knowledge but may on the other hand may feel negatively towards other aspects of animal use such as the pain inflicted on the animals during the research or simply having strong negative attitudes about fox hunting or using animals for entertainment. People's views on animal use can very considerably and can be influenced by numerous factors such as gender, experience of animals, belief in animal mind (Knight, Aldert, Cherryman, & Nunkoosing, 2004), pet ownership, knowledge of animals and the species of animal. ...read more.

I don't step back and take it further and see the animals running about in fields. And if I had to do it myself - kill the animal, I couldn't physically do it" (P12, 295, 299) and "You don't know what's going on behind closed doors" (P11, 63-34). This could be due to socialisation and its influence on the formation of attitudes as often 'meat' in western societies is seen as a part of a healthy balanced diet which is demonstrated by one participant "As a kid you're told to eat your greens and the meat tastes nicer than the vegetables, when you're a kid, it becomes something else on your plate - you don't associate a pork chop with a pig on a farm.... Most people are brought up like that, aren't they?" (P12, 302-308). Therefore, socialisation could have an impact on the way people view animal use as it partly determines background knowledge alongside media attention and education. Some participants felt that the media plays a role in the knowledge of animal use available with some suggesting that it only highlights what it wants to or simply does not highlight enough; "I suppose a lot of publicity about it has died away now - the posters of vivisection don't exist anymore - they were quite big when I was a teenager at school - seeing the rats pinned to boards and that sort of thing - it was quite everywhere you couldn't go anywhere without seeing that kind of thing" (P13, 32-26) which could suggest that people who have negative attitudes towards animal use have witnessed these awful images many years ago giving them a negative impression of animal use whereas nowadays the media does not place as much emphasis on animal use as it has done in the past which could explain peoples ambivalence. This part of the observational learning process of attitude formation as people acquire attitudes from exposure to mass media through magazines, films, television, and so on (Baron, Byrne, & Branscombe, 2006). ...read more.

as influencing factors in how people form attitudes towards animal use and thus a theory has emerged as a result of this analysis. The benefits of using this qualitative method is that it has allowed for exploration and development of new ideas, it is highly reliable in that it can be replicated easily by other researchers, and the findings are valid as interpretation of the data has been thoroughly explained however, one could also argue that the researcher has made interpretations that are incorrect as it is from his/her own perspective. A limitation of this research is that the interviews were not conducted by the researcher themselves. This therefore needs to be taken into consideration as the interviewer may not have asked relevant questions and seeing as the grounded theory makes use of the data in order to find a theory, one could argue that if the questions were not of relevance then the theory therefore may lack validity. Although the same interviewer was used throughout the course of the interviews in order to counterbalance experimenter effects however interviewer bias may have occurred. Although this study has had some minor weaknesses it has allowed for a progression of understanding of qualitative psychology and has given the researcher much experience in the use of Grounded Theory methods. It has developed the researcher's knowledge and understanding on people's attitudes toward the use of animals, and has allowed for a critical review. A rich and detailed analysis has occurred and has given participants the chance to really express their views and feelings freely on animal use. Therefore as a result, ideas for further research have emerged. An interesting idea would be do look at attitudes towards animal use in relation to age and gender as males and females may differ significantly in their views; it has been found that compared to females, males are consistently more supportive of animal use (Furnham & Pinder, 1990) and to see whether age effects peoples attitudes and views toward animal use. ...read more.