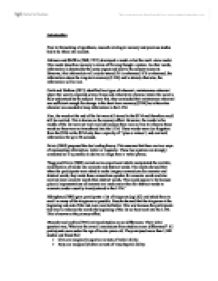 Verbal memory differences between the sexes

Introduction Prior to formulating a hypothesis, research relating to memory and previous studies had to be taken into account. Atkinson and Shiffrin (1968, 1971) developed a model called the multi-store model. This model describes memory in terms of flowing though a system. In other words, information is detected by the sense organs and sent to the sensory memory. However, this information will only be stored if it is rehearsed. If it is rehearsed, the information enters the long-term memory (LTM) and is stored; otherwise, the information will be lost. Craik and Watkins (1973) identified two types of rehearsal; maintenance rehearsal where the word is repeated several times and elaborative rehearsal where the word is fully understood by the subject. From this, they concluded that maintenance rehearsal was sufficient enough for storage in the short-term memory (STM) but elaborative rehearsal was needed to keep information in the LTM. Also, the words at the end of the list were still stored in the STM and therefore could still be recalled. This is known as the recency effect. However, the words in the middle of the list were not well recalled because there was no time to rehearse these words so they were not transferred into the LTM. These words were also forgotten from the STM as the STM only has a capacity of 7 plus or minus 2, and can hold information for up to 30 seconds. Paivio (1969) proposed the dual coding theory. This assumes that there are two ways of representing information; verbal or linguistic. These two systems are strongly connected so it is possible to derive an image from a verbal phrase. 'Begg and Paivio (1969) carried out an experiment which manipulated the variable, classification of words into concrete and abstract words. The results showed that when the participants were asked to make imagery connections for concrete and abstract words, they made these connections quicker for concrete words and also recalled more concrete words than abstract words. ...read more.

See Appendix One for a copy of the consent form. Task and materials The participants will carry out the experiment one at a time. The experimenter will read a list of twenty words with a two second gap between each word to the participant who will be asked to memorise as many of the words as possible. After all twenty words have been read, the participants will immediately write down as many of the words as they can remember. As this experiment is about the verbal memory, the only materials used will be the list of words read by the experimenter, a stop clock to time the 2 second interval between each word, a blank piece of paper and a pen. A list of 20, three lettered (monosyllabic), concrete words will be randomly chosen using a lottery style sample. They will be concrete, monosyllabic words to ensure that none of the words stand out from the list as this may make them easier to remember and therefore distort the results. Abstract words will not be used as participants may not be familiar with them unlike concrete words which are already stored in the LTM. The first forty concrete, monosyllabic words from an infant's storey book will selected and placed into a hat. The first twenty words that are picked out of the hat will be used for the experiment. An infant's book will be used to pick the words as it will have a high concentration of this type of word because young children will be incapable of understanding complex or longer words. This lottery style sample of choosing words will ensure that the words used are completely randomly chosen. See Appendix Two for a copy of the word list. Procedure The instructions to the participants were standardised as if participants heard different instructions, it may affect their understanding and performance of the task. ...read more.

from a larger target population would be used to ensure that all of the participants have varying degrees of intelligence and contrasting personalities and general characteristics. The sample of participants from the target population would be chosen using a random sample. Each member of the target population would be given a number then a computer which generates random numbers will be used to choose the sample. This would produce an unbiased, representative sample of the target population which in turn would produce results with more ecological validity. Also, it was impossible to control some of the extraneous variables such as stress levels and intoxication of participants. The higher the levels of stress and intoxication, the fewer words the participant is likely to remember. Again, this may have affected the accuracy and reliability of the results. Another aspect that could have distorted the results was that some of the male participants were also psychology students. Therefore, they already had an in-depth knowledge of memory and how to maximise their memory so they may have put these memory techniques into practise whereas no on else could have. Other psychology students would not be used as participants if the experiment is carried out again. A follow up investigation to this experiment would be to investigate the recall of images instead of words and then to compare and contrast the results with the results of this investigation. For example, 20 images would be shown to the participants for 3 seconds with a 5 second interval between each image. After all the images have been shown, the participant would recall as many images as possible. Conclusion The aim of this experiment has been achieved as it has been found out that the females who took part in this verbal memory test only very slightly out performed the males who took part in the test. Therefore, the experimental hypothesis has been proven to be incorrect but the null hypothesis is correct as there was no significant difference between the verbal memories of males and females. ...read more.