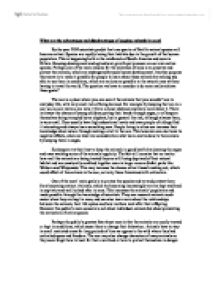 What are the advantages and disadvantages of keeping animals in zoos?

What are the advantages and disadvantages of keeping animals in zoos? By the year 2050 scientists predict that one quarter of Earth's animal species will become extinct. Species are rapidly losing their habitats due to the growth of the human population. This is happening both in the rainforests of South America and even in Britain. Housing development and agricultural growth put pressure on our own native species. Perhaps one of the main reasons for the existence of zoos is to preserve and protect the animals, which are endangered by such human development. Another purpose they serve is to make it possible for people to learn about these animals by making you able to see them in conditions, which are as close as possible to the natural ones without having to travel the world. The question we have to consider is do zoos really achieve these goals? ...read more.

The fact still remains that no matter how well the animals are being treated they are still being deprived of their natural habitat and are unnaturally confined together even in larger zoos as Safari parks like Woburn and Whipsnade. This may increase the chance of an illness breaking out, which could affect all the animals in the zoo, not only those threatened with extinction. One of the zoos' main goals is to protect the species and try and prevent them from becoming extinct. Animals, which are becoming increasingly rare are kept and bred in captivity and well looked after in zoos. This increases the animals' population and made possible through the knowledge of scientists. They can research animals much easier when they are kept in zoos, and can also learn more about the relationships between the animals, their life cycles and how mothers look after their offspring. ...read more.

Animals don't only lose their freedom by being kept in zoos but also their socialization with the other animals. This is also true about the seals that have to perform tricks in order to receive a treat (fish). This however would be different in the wild because they can catch fish to eat whenever they want. Through changing all these factors animals will therefore act differently in zoos and people still se them there but is in actual fact not learning what these animals are truly like, in nature On balance, I believe that zoos can be a benefit both for the public and for the animal world if the conditions are as natural as possible, if they are well looked after and treated with care. I think that Whipsnade zoo in Bedfordshire is a good example of a zoo, which can both educate the public while working to prevent certain species from becoming extinct. Sune Geldenhuys 11H G5 ...read more.