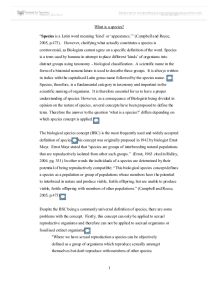 What is a species?

What is a species? "Species is a Latin word meaning 'kind' or 'appearance.'" (Campbell and Reece, 2005, p.473). However, clarifying what actually constitutes a species is controversial, as Biologists cannot agree on a specific definition of the word. Species is a term used by humans in attempt to place different 'kinds' of organisms into distinct groups using taxonomy - biological classification. A scientific name in the form of a binomial nomenclature is used to describe these groups. It is always written in italics with the capitalised Latin genus name followed by the species name. Species, therefore, is a fundamental category in taxonomy and important in the scientific naming of organisms. It is therefore essential for us to have a proper understanding of species. However, as a consequence of Biologists being divided in opinion on the nature of species, several concepts have been proposed to define the term. Therefore the answer to the question 'what is a species?' differs depending on which species concept is applied. The biological species concept (BSC) is the most frequently used and widely accepted definition of species. This concept was originally proposed in 1942 by biologist Ernst Mayr. Ernst Mayr stated that "species are groups of interbreeding natural populations that are reproductively isolated from other such groups." (Ernst, 1963 cited in Ridley, 2004. pg. ...read more.

The calf was born on Dec. 23 to Kekaimalu, a mix of a false killer whale and an Atlantic bottlenose dolphin...The young as-yet unnamed wholphin is one-fourth false killer whale and three fourths Atlantic bottlenose dolphin. (Lee, J.J. (2005)) The BSC does not account for these rare hybrid occurrences, such as the previous example. Some people may argue that this interspecies mating was somehow forced since the animals were in captivity however "there have been reports of wholphins in the wild." (Lee, J.J. (2005)). This natural example of successful hybridization along with a few more selected cases of interspecies mating that occur represent a group in which the term species cannot be defined in terms of interbreeding and hence the BSC cannot be applied. An alternative species concept to BSC is the Morphological Species Concept (MSC). According to this concept, "a species is a community, or a number of related communities, whose distinctive morphological characters are, in the opinion of a competent systematist, sufficiently definite to entitle it, or them, to a specific name" (Regan. (1926)). In other words species are defined as groups of individuals that have many morphological similarities that are clearly distinguishable from other groups. This is how, in practice, taxonomists recognise species. ...read more.

(Oxford Dictionary of Biology (2004)) This concept is not as limited as the BSC since interspecies mating is not excluded. However the PSC has limitations of its own; this concept will tend to result in extreme division of species into many small groups, since variation is present in almost every group of organisms. In conclusion, no specific definition of a species can be given, but in fact there are several, with each depending on what concept is being used. The BSC defines species in terms of interbreeding. The MSC defines species in terms of morphological similarities. PSC defines species in terms of evolutionary history. There are in fact more species concepts but, like the ones mentioned, each concept has faults and no concept can be applied constantly to every situation. Each concept is similar in principle. They all define species as distinct groups that differ according to one particular factor. "No one definition (of species) has as yet satisfied all naturalists; yet every naturalist knows vaguely what he means when he speaks of a species." (Darwin, C. (1859)). Darwin wrote this in 1859 yet it is still true today. The definition of species therefore, is the one which best suits the context in which it is being used. ...read more.

Overall this is a well thought out essay. It has a very clear and logical structure, and covers each of the necessary points. Ideally it would include a few more biological examples, and a slightly deeper thought of how these philosophical concepts actually apply to research science. This, and the heavy reliance on quoting others' work prevent this from being a first class essay. If a definition is very specific then it can be quoted, and of course if something is paraphrased from a single source it should be referenced. But in several places this essay just quotes large bodies of text with no effort to understand or explain them. The student may have read the text and internalised it, but without attempting to put it into her own words, we cannot be sure that she truly grasps the significance. At my (Russell Group) university, this would score 4 stars.