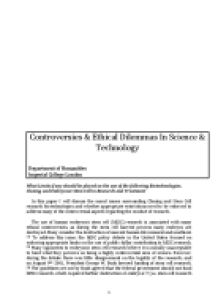 What Limits if any should be placed on the use of the following Biotechnologies. Cloning and Embryonic Stem Cell in Research and Treatment

﻿Controversies & Ethical Dilemmas In Science & Technology Department of Humanities Imperial College London What Limits if any should be placed on the use of the following Biotechnologies. Cloning and Embryonic Stem Cell in Research and Treatment In this paper I will discuss the moral issues surrounding Cloning and Stem Cell research biotechnologies and whether appropriate restrictions need to be enforced to address many of the controversial aspects regarding the conduct of research. The use of human embryonic stem cell (hESC) research is associated with many ethical controversies, as during the stem cell harvest process many embryos are destroyed. Many consider the destruction of nascent human life immoral and unethical. [1] To address this issue, the hESC policy debate in the United States focused on enforcing appropriate limits on the use of public dollar contributing to hESC research. [2] Many opponents to embryonic stem cell research believe it is morally unacceptable to fund what they perceive as being a highly controversial area of science. However, during the debate there was little disagreement on the legality of the research, and on August 9th 2001, President George W. Bush favored funding of stem cell research. [3] The guidelines set out by Bush agreed that the federal government should not fund hESC research, which required further destruction of embryos [2] (i.e. stem cell research conducted using only spare embryos from in-vitro fertilization estimated at more than 400,000 in the US alone [3]). ...read more.

[7] Rebecca Dresser, a Professor of Ethics at Washington University, addresses the issues surrounding the use of human embryos in research, and discusses whether the intention for which embryos are created for matter, and if embryos deserve ?special respect? due to their ?potentiality?. [7] Much like Blackford, Dresser concludes that at the point at which stem cells are derived, the early embryos lack many characteristics, including the ability to think, feel pleasure or more importantly pain, since their nervous system hasn?t yet formed. [7] Consequently, Dresser believes that due to the facts, many people perceive early embryos as lacking a moral status. Dresser raises an important question: ?if early embryos aren?t persons?can anything be done with them?. [7] To answer this question it is fundamental to understand the intentions for which embryos are or may be created. To highlight the significance of these views (i.e. embryos lacking moral status), which are currently being endorsed in embryo research, Dresser raises a fundamental issue concerning the creation of an embryo via cloning a living persons cell (procedure known as ?therapeutic cloning?) for biomedical research purposes. [7] Rebecca argues that deliberately ?creating human life? for research, undermines the ?special respect? embryos possess due to their potentiality and that we are treating embryos too much like objects. [7] She predicts that if the Bush administration is willing to give a lack of moral status to embryo, the implications may result in a slippery-slope. ...read more.

[11] Even though I disagree with the use of animals in cloning, I believe the opinions of the GAEIB must be considered if animal cloning continues to take place. However, many researchers today have violated the fundamental ethical conditions, which allow work on animals being viewed as acceptable. For instance, Dolly the sheep was euthanized due to a progressive lung disease and severe arthritis. [9] According to the outlines set out by the GAEIB, researchers violated the condition, which states that researchers have the ?duty to avoid animal or minimize animal suffering since unjustified or disproportionate suffering is unacceptable?. [11] Embryonic stem cell research and cloning will continue to take place, even though many ethical and moral issues surround the biotechnologies. It is therefore essential that governing bodies place appropriate limits on the use of biotechnologies, and ensure further effort is made to improve public awareness of such technologies. [11]They must realize that as science evolves, new technologies will increase the power of people over nature. [11] Therefore researchers have a responsibility and duty to ensure research work is conducted according to a strict mandate. [11] Whether we decide that the certain areas of biotechnologies are morally wrong and unacceptable depends on what moral status we assign to early embryos as discussed in the paper. Essentially, we must ensure that the agriculture and medical benefits of using the biotechnologies outweigh the ethical controversies it is associated with. ...read more.