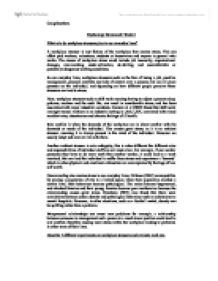 What role do workplace stressors play in our everyday lives?

Psychology Homework: Week 6 What role do workplace stressors play in our everyday lives? A workplace stressor is any feature of the workplace that creates stress. This can affect paid workers, volunteers, students or housewives and anyone in general who works. The causes of workplace stress could include job insecurity, organisational changes, over-working, under-utilisation, de-skilling, and uncomfortable or potentially dangerous working conditions. In our everyday lives, workplace stressors such as the fear of losing a job, punitive management, personal conflicts and lack of control over a persons role can all place pressure on the individual, and depending on how different people perceive these stressors can lead to stress. Next, workplace stressors such as shift work meaning having to adjust a persons sleep patterns, routines and the such like, can result in considerable stress, and has been associated with major industrial accidents. Czeisler et al (1982) found that shift work amongst manual workers in an industrial setting in Utah, USA, correlated with raised accident rates, absenteeism and chronic feelings of ill health. Role conflict is when the demands of the workplace are in direct conflict with the demands or needs of the individual. ...read more.

None of the other timings produced ulcers. An investigation of stomach secretions conveyed that stomach acidity increase during rest periods when in the 6 on, 6 off schedule and such acidity was related to the development of the ulcers. These findings shows that the ulcers were due to psychological stress and they also suggest that it is being in control that creates this psychological stress. This is why people important jobs with lots of responsibility suffer from more stress. It may not be reasonable to draw conclusions about human behaviour. However, research with humans has supported Brady's findings. For example Margolis and Kroes (1974) found that firemen with more responsibility, were seven times more likely to develop gastric ulcers than shop workers who had less responsibility. This study was done as a laboratory experiment and maybe considered unethical, as it involved hurting animals, however it is argued that it would have been worse to acts out the experiments on humans, and also, that usefulness and benefits of this study, outweigh the costs, and excuses the effect on participants. Lastly subsequent research of ulcers found that bacterium (helicobacter pylon) not stress, is a major cause of ulcers. This research was done by Marshall et all in 1985 and contradicts Brady's findings. Craig Southern ...read more.